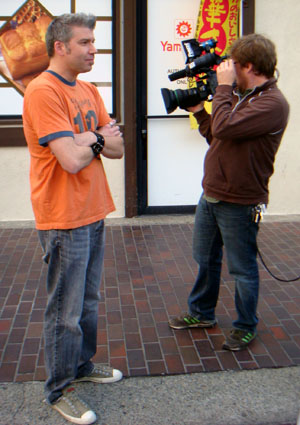 During one of my outing to Little Tokyo, I saw Chris Gore shooting what I assume was a clip for his DVDuesday on Attack of the Show on G4.

Basically, he reviews the new DVDs that come out on Tuesdays with “Buy, Rent or Pass” choices.  From his reviews, I can tell that aside from being a movie fanatic, he is more of a geek than I am, which is pretty hard to do.

Chris is also the founder of filmthreat.com, which started with reviews of mostly small indie movies, but now has gone more mainstream.

Speaking of movies, I saw “The Brave One” with Jodie Foster on Monday with my movie buddy.  Although there was a flashback sex sequence with the dead guy with Jodie, I’m pretty sure the nude scenes were done with a body double.  That’s not to say that Foster doesn’t have a nice body, but she probably doesn’t have to do stuff like that at this point in her career.

My friend liked the movie because she has some anger inside wanting to come out, but I found the movie to be a cheap imitation of “Death Wish”.  Arguably, it could even be considered an imitation of “Taxi Driver,” in which Foster played a teenage prostitute in New York, and De Niro was the vigilante.

In “The Brave One,” Foster plays a radio personality who is a victim of a violent attack which ends in her boyfriend being murdered.  After this attack, she becomes a recluse, then has some type of weird epiphany where she finds pleasure in a Bernie Goetz type vigilante murder spree of New York.  She befriends the detective investigating the murders and even interviews him for her radio show.

At this point, I lost interest in the plot line and was just hoping to see some good gore.  Unfortunately, the gore is not glorified and the plot turns into a rediculous ending.  The only thing missing was an epilog showing the detective taking credit and being a big hero.  If Foster’s character and the detective were lovers, it might almost be able to fly, but I didn’t buy the ending for a second.

As Chris Gore would say, “Pass.”

2007-09-21
cochinoman
Previous: Deep Stack Tournaments at the Hustler
Next: Flexcar.com By The Hour Car Rental