As you may read previously, my attempt at going hands-free using the Motorola T505 was a failure.  At my friend’s suggestion, I decided to go to the Bluetrek website to see what they had there.

They have a ton of bluetooth headsets, but they also have 2 car kits.  One has a head-set plus car kit, and the other is just the car kit.  The unit I got is called the Bluetrek Car Kit Suface Sound Compact, and is shown below.  The MSRP is about $100 but I got mine online from Expansys where it’s currently selling for $54.  You can also get this device at the Apple store. 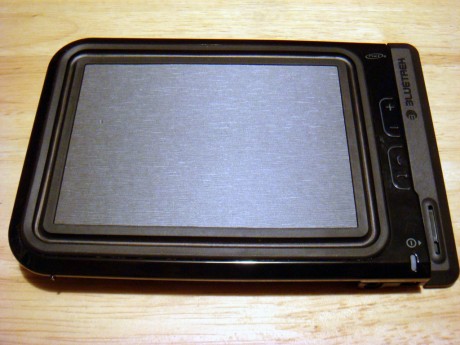 As you can see, the entire flat surface is the speaker.  It’s very interesting technology, but it doesn’t seem to make the sound any louder than the tiny speaker that was in the Motorola unit.

After unboxing and charging the battery, pairing the unit with my LG EnV2 cell phone was a breeze, and didn’t even require typing in any passwords or anything. 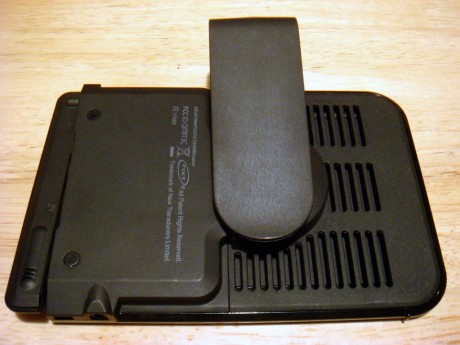 Back of unit showing the clip for the visor

The picture above shows the back of the unit and the clip that is used to install the unit to the car visor.  As you can see, there’s not much except for the large flat surface for the speaker on the other side.

The microphone is located on a “stick” shown on the left in the picture above.  By lifting the “stick”, you move the microphone closer to you, and at the same time, this turns the device on.  It might also contain an antenna for the bluetooth but that’s just speculation on my part.  From what I’ve seen with bluetooth headsets, there doesn’t seem to be a need for any antennas.

Angle showing the buttons on the side

In the photo above, you can see the buttons on the right side of the unit more closely, with the microphone “stick” in the up (or on) position.  The top buttons are for volume up and down.  The bottom button is for “talk” and “mute.”  If your phone is not set to auto-answer, you push the talk button to pick up the call.  I have mine set to auto-answer so the call just comes through to the speaker phone so I don’t have to push any buttons.

The LED near the left bottom of the picture is an indicator light for power. 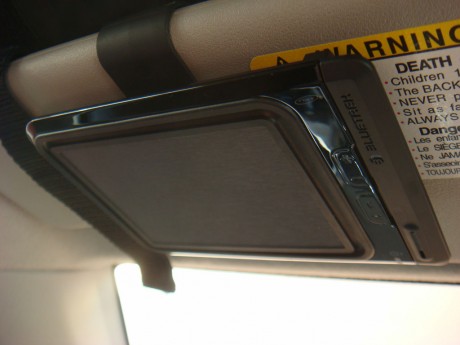 The device comes with a car charger that plugs into the cigarette lighter socket of your car for charging.  This same cable unplugs from the car charger and can plug into an USB device for charging via laptop or similar devices.

Unlike the Motorola, I didn’t have any problems with buzzing or strange background noise with this device. The speaker is loud and clear.  At first, I had some problems adjusting the microphone but I figured out that the best position is to have the microphone stick parallel to your face instead of having the end pointing to your mouth.  After this adjustment, the outgoing sound was clear and loud enough for people to hear me.

When you turn on the device via the microphone stick, the unit with flash and make a repeated beeping sound to indicate that it’s pairing automatically with your cell phone.  I like this a lot better than the Motorola which required you to push the “On” button for 3 seconds, then wait more time for it to pair.

The only thing that is a little bothersome is the microphone stick itself.  On two occasions, when I was moving around in the car, I hit my head on the stick.  It didn’t hurt or anything, but it’s a little annoying.  It’s not a big deal but something that I thought I should mention.

Otherwise, I’ve been happy with this device, and now I am fully hands-free and legal on the streets of Los Angeles.