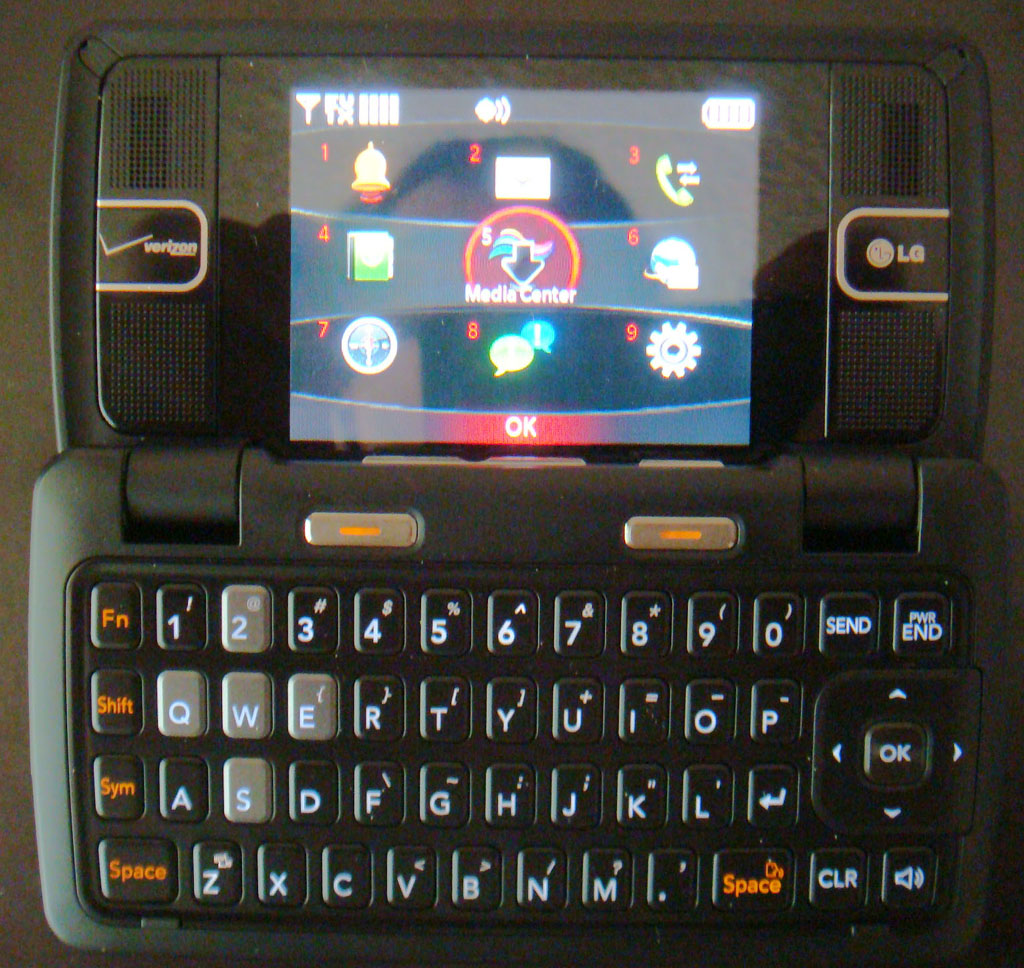 Downgrading to the LG EnV2 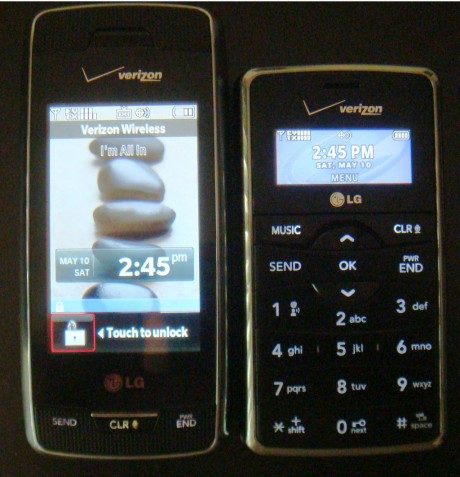 After using the LG Voyager (left) for several months, I got sick of the touch screen and so I decided to “downgrade” to the LG EnV2 (right).  Basically, the EnV2 is a smaller cooler looking version of the LG EnV.  One thing that you’ll notice right off the bat is the outside screen is smaller than the EnV.  Of course, compared to the Voyager, with it’s massive touch screen of 240×400, there’s hardly a comparison.

The EnV2 external screen is a mere 164×64 but they do what they can with it.  The font size for the time is large enough, as well as the numbers as you are dialing or receiving calls.  In fact, they even show a microscopic image of the person you are receiving the call from if you have their picture stored.

The external buttons are large and easy to press.  One exception is the “2” button which has the top cutout for the “down” button to intrude into.  On more than one occasion, I accidentally pushed the down button when I wanted the number “2”.  Otherwise, the buttons are good.

I really like the smaller size of this phone. It fits better in my pocket as well as in the pouches that I have in different places, including my laptop carrying case. 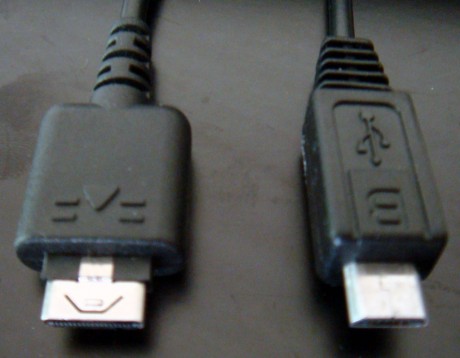 However, one of the first annoying thing was they changed the power cable down to a mini USB, which is different from both the EnV and Voyager.  When I got the EnV2, I just assumed I could still use my old car charger, but it turns out that’s not the case.  Too bad the Verizon Wireless website doesn’t tell you this since they already knew what cell phone I was downgrading from.  But that would be asking too much. Besides, it’s probably a business process that’s patented by somebody else.

It’s really annoying how these companies keep changing the cables to make more money.  Okay. We understand you want to make money but can you please do it some other way?  It’s annoying enough to make you not want to get a new phone. 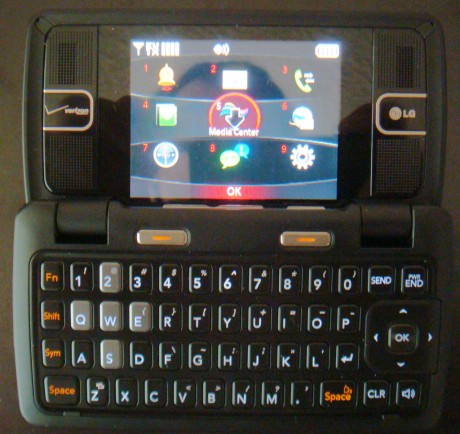 When you open the Env2, it’s basically the same as the EnV and Voyager.  The screen is 2.4 inches diagonally, which is a noticeable size bump over the 2.25 inch screen on the original enV, but slightly smaller than the Voyager.  The QVGA display supports 262,000 colors and a resolution of 320×240.

The keyboard layout is exactly the same in all units.  I like being able to type on a “real” keyboard for text messaging and emailing.  The only bad change they made was the 2 function keys at the top (above the numbers) are flush now and harder to press.  In the EnV and Voyager, they stuck out just enough to make it easier to press down.

The speakers are as loud as the Voyager and the speaker phone is good.  Unlike the Voyager, I didn’t have to turn the volume down a bit to avoid the unit from maxing out. 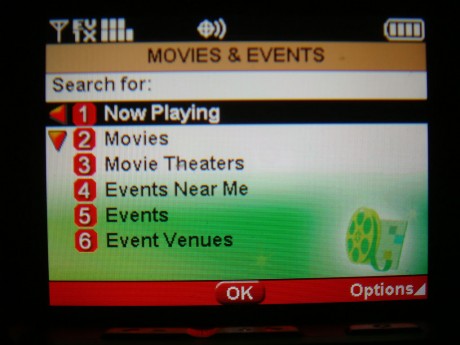 Pretty much all the functions (e.g. calculator, calender, address book, IM, email) are the same as the Voyager.  The 2 main differences are the Voyager’s web browser is good enough to actually browse real websites, whereas the one for the EnV2 is similar to the EnV and reverts to the “Mobile” version of the websites and often cannot display non-mobile websites properly.

However, there’s a newer version of the Navigator on the EnV2, which has more features than the one on the Voyager.  It could just be an upgrade that was available for the Voyager that I wasn’t aware of, but it’s got some great features.

One of the best new features is the ability to find Movie Theaters playing a specific movie.  It works really well.  With the Voyager, I used google with mostly good results but you do have to know how to use google for this purpose.  With this new Navigator, you don’t have to know any google tricks at all.

The actual navigator has been spruced up to look more 3D, and there is a traffic and weather information page as well.  So if you need a GPS navigator, this is works well enough to replace your handheld one so you can carry less stuff on the go.  If you get a call during your turn-by-turn instructions, you can accept the call, then when you end you call, it goes back to your navigation.

Unlike the Voyager, the EnV2 does not have live TV.  You can see streaming video, but not what Verizon calls V-CAST Mobile TV, which allows you to watch a limited number of live TV shows.  So if that’s important, this unit is not for you.  For me, I rarely watched that and it costs extra, so it was a waste of money.

Lastly, there is one annoying bug that lingers from both the enV and Voyager, and I wish LG would fix this problem.  When you store phone numbers in the contact list, you can select a “Group” for the contact.  For example, “Friends” or “Family” or “Co-workers.”  You can even add more groups.

The only problem is you can only place 10 people in any group.  WFT!??  In the world of cell phones with megabytes of memory available, this is a ridiculous limit that should be removed, especially since you can store up to 999 contacts.  So out of 999 people, I can only have 10 friends.  This code must have been written in the 80’s.  What a joke.  I suggest LG hire some real programmers for their next unit.

If that’s not enough, after about 300 incoming text messages, your inbox is “full” and you’ll get an error message.  Come on guys.  300 text messages?  Really?

That’s the end of my rant.

All in all, if you don’t need a full browser, or V-CAST video, but want a full keyboard for texting, this is a good unit and I will continue to use it… until something better comes along.