After crying myself to sleep on Saturday, I woke up to a text message on Sunday from a friend that told me that he was able to get a Pre at a Radio Shack downtown. What!? Sure enough, I called one and Jared tells me that they have one last Pre left. Why didn’t I think of this before? Unfortunately, the Lakers game was about to start so there was some traffic but I managed to get there in time to pick up my Pre.

As you can see, it’s a lot smaller than my Palm Pilot, which I still had from the 90’s. While I was buying my Pre at Radio Shack, no less than 2 people came in to buy one. Unfortunately, because of a previous identity theft problem, the first Sprint rep did not approve my account. Jared was nice enough to let me try again with the Sprint supervisor and after being asked about what company I worked for in the 80’s, I finally was able to open my account and buy my Pre. 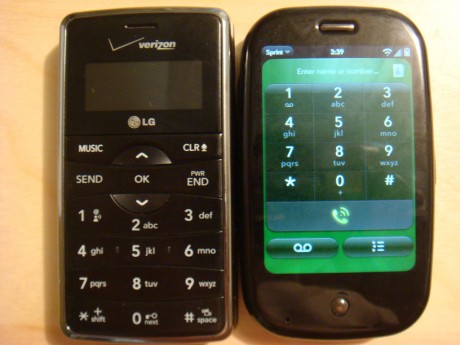 This shot compares the size of the LG enV2 (my current phone) to the Palm Pre. As you can see, they are almost the same size.

My first impressions:
Some reviews are saying that the bottom of the phone is as sharp as a Katana. Although it is a little sharp, it’s not a deal breaker for me. Since I mostly text message, the keyboard is an important feature for me. Yes, the keys are pretty small and strangely sticky, but after 2 days, I’ve gotten used to the feel of it. However, keep in mind that I have small hands, so this may not be the case for you if you have large hands.

So far, the Sprint service is okay, although I only get 3 out of 5 bars at home, whereas I get 4 out of 4 bars with Verizon.

After using it for almost 2 days, I love the multi-tasking, iPhone like touch screen and combined IM/SMS messaging screen. The multi-tasking allows you keep all your applications running, like playing music. This is clearly one of the best features of the Pre. My LG couldn’t even make calls while I had the Navigation application going. With the Pre, when a call comes in when you are listening to music, the music will stop automatically. Then when you are done with your call, the music re-starts.

However, unlike music, if you are watching a video, it will pause when you switch applications. As for the sound, the speaker is on the back. So, although it is loud, it’s not as loud as my LG enV2 which has the speakers inside where the screen/keyboard is located.

So far, nothing has crashed but I have been able to get the contact screen to become blank. Cut and paste works but controlling the location of the cursor could be better with an iPhone type magnifier.

The turn by turn Navigation is better than the one from Verizon. The voice is easier to understand and the “ETA” is shown along with the remaining mileage.

The camera is pretty good for a phone and the flash is actually fairly bright. The images are certainly good enough for posting on myspace or using as wallpaper for the phone. There’s no video recording for the Pre yet. I’ve only used that feature once on my LG so that’s not very important for me.

After using it a lot for one day, the battery was below 10% by 7pm. This is with the screen bright, and WiFi on, but Bluetooth off. I’ll have to try it again but the level seems to go down pretty fast. This could be a problem.

There’s not really a lot of applications to download for the Pre (especially compared to the iPhone’s 35,000). What’s a little strange is you cannot queue multiple downloads. You’d think with the multi-tasking, they would let you at least queue the downloads.

Palm already released version 1.0.2 yesterday (Sunday), which I downloaded and installed. I’m not sure but I think it just adds an alarm clock and fixes some bugs.

After using the “Sync” feature, I got all my contacts from my google account into the phone. Actually, there were a lot of junk email addresses that I had to go in and manually delete. My facebook account is hardly used so I didn’t even bother syncing that with the phone.

The phone automatically backs up all your data once a day, which is a great feature. I had this feature with my Verizon account so I’m pleased that it is available with my Palm Pre.

So far so good. I’ll keep using it and reporting back here with any problems or thoughts.