The Prius c was shown at 2012 North American International Auto Show in Detroit, January 10. The “c” stands for “city” according to Toyota, and yes, it’s lower case. Aimed at the younger urban market, it is ready for the North American market in the Spring 2012 time frame.

Toyota is boasting a 50 mpg combined highway/city mileage, which makes it the most fuel efficient vehicle to date, without a power plug. This low end Prius will have a starting MSRP below $19,000, making it about half the price of the upper end hybrids that are available on the market. Obviously, the target audience is the younger, price sensitive consumer who wants good mileage to save money. 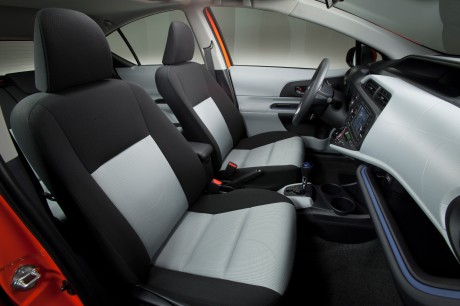 The list of standard features is impressive for such a low price. Some of the standard features include automatic climate control, tilt-telescopic steering wheel with audio, climate, Multi-Information Display and Bluetooth® hands-free controls, and remote keyless entry with illuminated entry. Some of these are not standard on the original Prius models, although I would guess that they will be in the new versions.