On my last quick trip to Tsujita, I had the sashimi. Interestingly, as soon as I entered the restaurant, the waitress told me that they only serve noodles during the day. Considering the name of this restaurant, I’m sure just about every person that comes at night asks for noodles. The sign outside should read “Tsujita Artisan Noodle During Day Only.”

This time, I tried their sushi as per my promise from the last review. Instead of getting them à la carte, for this trip, I ordered the nigiri sushi set shown above for $30 (on menu, but $28 charged on tab).

As you can see, you get 8 pieces of what appears to be the chef’s pick of the night. The cooked shrimp was enormous and so was the egg. In fact, the egg was so big, he just put a tiny dab of rice on top.

Also, I can tell that the wasabi was real, and not the fake ones you normally get. I’m not sure if the Ikura (Salmon roe) was overflowing on purpose to display abundance or just a messy mistake. I’m going to go with the former. The reason: The chef not only wears his chef uniform but I could see that he was also wearing a tie under it. Now that’s a serious chef. No goofing around in the kitchen for this guy and no messy mistakes for a guy like that. 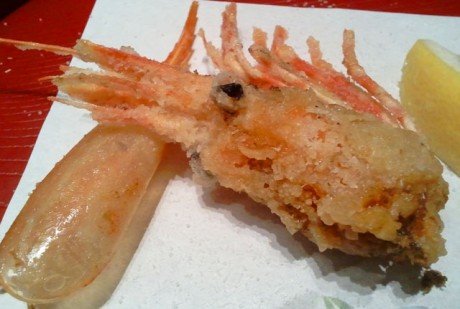 To prove how big the shrimp was, they fried up the head and tail and served it as a free appetizer for me. The miso soup was $2 but the hot green tea was free.

Just like last time, I’d have to say that the quality is good but a little over priced, even for LA. I’m still going to try to have their noodle somehow but getting there during the day is going to be a challenge.

Next time: Ramen for lunch