Free Internet service and mobile data was not enough, so now FreedomPop says they will be offering free phone service this summer, using the Sprint 4G Wimax network with no contract.

What you get will be 200 free voice minutes and 500MB of mobile data, but unlimited text. So if you normally use WiFi and don’t talk a lot on the phone, but text a lot, like me, this is perfect.

If this deal is like the free Internet deal they have, you will have to buy the Andriod phone from FreedomPop so choices will probably be limited, and not likely anything new. In fact, it’s very likely the phones will be refurbished and normally free from other carriers but FreedomPop will probably charge the customer to get started.

For now, no 4G LTE and you cannot transfer your phone number to this service. The later could be a deal breaker for some people.

But if you are on a tight budget, or don’t have a phone because it’s too expensive, this is your chance to get a mobile phone. Or if you already have mobile phone service, but would like a second phone line for business without having to pay, this might be the solution for you.

Click on the image below to see their commercial. 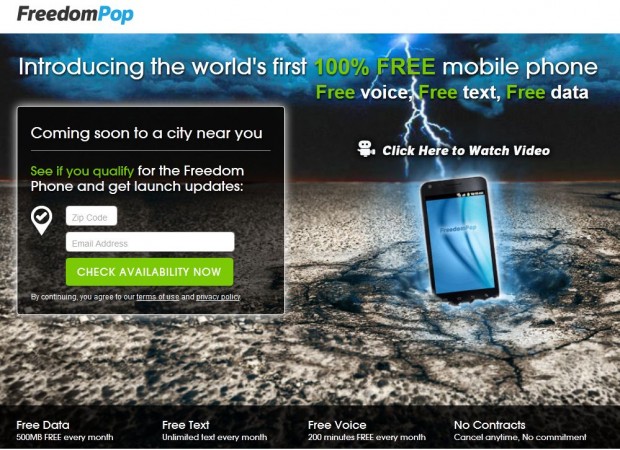 Update June 27, 2013:
FreedomPop has stated that they will be providing “refurbished HTC EVO 4G Android phones and potentially Samsung and LG handsets–for $99 to $199.”
freedompop 2013-06-12
cochinoman