You may recall my older article about having problems with my first HP Pavilion ze5470us desktop from Best Buy, that was DOA and had to be replaced.  So when I upgraded to yet to another HP Pavilion m9450f, you may have wondered if there was something wrong with my brain.

At first, everything was going good. Except for compatibility problems with Vista, the computer hardware was working fast and smoothly…

Just about the time I finally had everything installed and moved over from my old hard drive, I turn on my computer and I get a blank screen.  Oh crap.  Not good.

HP has a built in self test program by pressing F9 upon power-up.  This is actually a nice touch.  The screen below shows the result of the testing.  You can click on the picture to see a larger version. 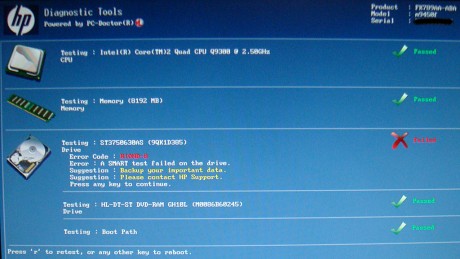 Notice that the hard drive is dead. Also, notice where the diagnostic says, “Suggestion: Backup your important data” WTF? How am I supposed to backup my dead hard drive? It also says to call HP support.  Which I did.

HP support is one of the worst support call centers in the industry.  It took them 55 minutes to tell me that my hard drive was dead and that they would send out a new one to me.  Most of that time, I was on hold waiting for the 2 people on the line to read their script so they can tell me what I already told them.

Of course, I didn’t wait 6 days to get the replacement hard drive.  I went straight to Fry’s to get a 1TB SATA drive so that could start restoring my new computer. What’s really frustrating is that it took me about 3 weeks to finally get everything restored from my old computer and all the programs re-installed.  Now, I have to go through the entire procedure again.  What a pain.

The picture below shows the HP’s guts out.  The cage for the hard drive comes out so that you can install the drive.  It’s not as clean as DELL’s case but it’s not the worst one I’ve seen in my life.  I give it a 6 out of 10. 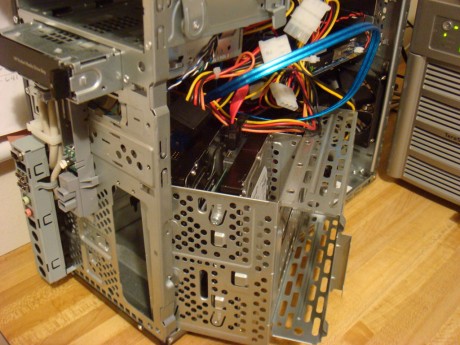 So I finally did get my replacement hard drive after about 6 days. However, it took about 2 weeks to get the “system restore” DVDs that HP sent out. Luckily, I did create these DVDs myself while the computer was still working so I didn’t have to wait.

After I got the replacement drive, I added that to the system to use as a backup internal drive. I had to go into the BIOS to tell it which drive to boot from, but otherwise, it all works fine.

In conclusion, it’s obvious that I’m as stupid as stupid does.  Even after having problems with my first HP, I still went out and bought yet another HP and paid the price.  To be fair, the hard drive dying is a Seagate problem, but HP gets the blame for putting it in their system.  It would have been a lot less work for me if the new HP was DOA instead of dying after 3 weeks.

So I’ll continue to use my HP and see how many weeks it lasts this time.