My old HP Media Center PC with just 250MB of RAM felt super slow compared to my new Toshiba Qosmio with 2GB of RAM. So, I decided I’d add some RAM to my old computer.  Although I haven’t done a RAM upgrade in probably 10 years, I’ve built computers from scratch in my previous life so there should be no problems.

Fast forward to me slapping myself for blowing up my motherboard without even backing up my hard drive.

Maybe I subconsciously wanted to blow up my computer so I can buy a new one.

In need of a new computer, I quickly checked my options. The Dell looked good but I didn’t have time to order something online. I needed a computer today. Right now. Best Buy didn’t have what I wanted in stock so off to my good old stand-by Fry’s I go.  I called ahead and had them put my HP Pavilion aside for me, but I knew I had to get a bunch of other stuff as well.

As you can see from the picture above, basically, this unit looks like my old Media Center.  But inside, the specs are a little different: 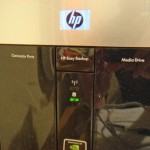 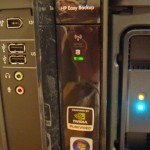 Doors open to show inside 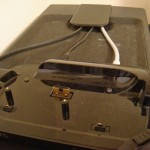 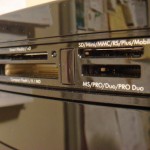 15 in 1 memory card reader near top in front 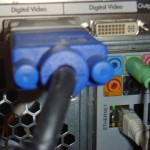 Back: Dual DVI out

As you can see, this baby is fully loaded.  But as per usual, I’ve got some complaints.

The first thing I noticed was that they changed the keyboard.  Now, the weird function keys are on the left side.  I’m used to having the CTRL key in the lower left corner of the keyboard and this bothered me enough to switch back to my old keyboard.  Why do they insist on changing stuff that works?

I totally understand laptops coming with built-in WiFi these days, and that’s great.  But if you don’t have a hard wired Ethernet coming to your desktop, maybe you need to move your desk.  For me, the built in WiFi is a total waste.  I’ll never use it.

The 2 DVI outputs is great.  I wish I had the money and space for 2 monitors.  However, they don’t give you even one DVI cable.  I had to use my old analog cable.

Unlike my old HP desktop, the doors on the front open like doors, instead of sliding to the side.  It’s not horrible but it kind of gets in the way of the cables a little.  Another example of changing what worked before to something else that doesn’t work as well.  But I have to admit, it does look better.

There’s an “Easy Backup” button on the front to start your backup.  Really?  Do we really need a button dedicated to this?  How about just using the scheduler to backup your drive automatically without even pushing a button.  Isn’t that easier?  How dumb do they think we are?  Never mind.  Don’t answer that.

The 64bit version of Vista does have compatibility problems.  Most of these can be solved by running the application in Windows XP SP3 mode.  However, a couple of programs I use do not work properly.  Even after upgrading to the current version, Multiplicity does not work completely. To make matters worse after my crash, the Memeo backup (and restore) doesn’t work in 64bit mode.  I contacted them and they confirmed that it currently does not work with Vista 64bit.

Alright.  Enough complaints.  What do I like about this puppy?

They put a “technology pad” on top of the computer.  Sounds stupid but it works great.  It’s a lowered area on top with some type of anti-slip covering as well as a guide for the cables so everything from your iPhone, MP3 player, digital camera and camcorder can rest easy and clean on top.  This is the opposite of the PS3 which is round on top so everything slips off.

Coming from my old HP with 250MB of RAM, this computer screams.  As fast as I can open up windows, they open.  I rarely have to wait for the computer.  It’s usually waiting for me, or an external device.  But the speed can really spoil you.

All in all, I’m happy with my new desktop. It’s fast, and I’m finally getting used to Vista.  It’s not so bad.  I’m starting to like it.  Just in time for Microsoft to come out with Windows 7.