Home > Entertainment > Eating & Drinking > How to Get Pinkberry Tax Free

How to Get Pinkberry Tax Free 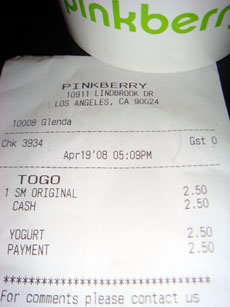 Everywhere I go, people seem to be talking about Pinkberry. I’m not a big yogurt fan but since they seem to be multiplying like rabbits, I decided to try it out.

As yogurt goes, it’s very tasty and I can see how people get addicted to it. After my initial purchase, I decided to try the coffee and green tea flavors. To me, they all pretty much tasted the same, except for a faint coffee or green tea flavor added.

As for the basic taste of Pinkberry, It has a somewhat spoiled milk sour taste. But in a almost drug-like way, it makes you want more of it. I think it’s possible that there’s some type of chemical, natural or not, that’s inside every cup of this yogurt. Originally, Coca-cola used extracts from coca leaves (which create cocaine) in every bottle. No wonder it was a hit.

There could be something similar in Pinkberry. That doesn’t mean that it’s unhealthy or bad for you. Maybe whatever is in it that’s addictive is good for you. Or not.

By I digress. The reason for this post is that I noticed that sometimes they charge sales tax, and sometimes they don’t. I was so confused by this, I asked the manager at Pinkberry. She told me that the law requires a “dine-in” tax. Therefore, if you ask for the Pinkberry “to-go,” there’s no tax.

Huh? Really? But when I get my Jack-in-the-Box “to-go,” I still have to pay tax.  The only thing I could figure out is that yogurt is a diary product, and I know milk is sales tax free at the grocery store. So does yogurt fall under this catagory?

The Pinkberry manager went as far as to say that if I were to order my yogurt “to-go,” then just sat down at one of the tables, there’s nothing she could do about it. <wink> .

Hmmm. Very interesting. Am I the last person on earth to figure this out? For all I know, since I’m new to yogurt, people may have had this thing figured out for years.