Google has decided to provide low cost cell phone service on their invite only (for now) Project Fi.

Initially, they will offer only the Nexus 6 phone, made by Motorola (previously owned by Google), and will have a special SIM card that allows it to work with both Sprint and T-Mobile networks. It also seamlessly (according to Google) switches from the 4G LTE network to Wi-Fi calling without dropping the call. Republic Wireless also does the same thing with their Moto phones. I’ll believe that when I see it for myself.

As for pricing, nobody can beat free service from FreedomPop, but I’m expecting Google’s Project Fi to work a lot better than FreedomPop. What is new is you get back your money for data that you don’t use. Nobody else offers a monthly refund like this yet, although Republic will start in June. For example, if you have the 2GB plan for $20, plus the basic $20, your total is $40. However, if you only use 1.1 GB of data that month, you get $9 back (see below). 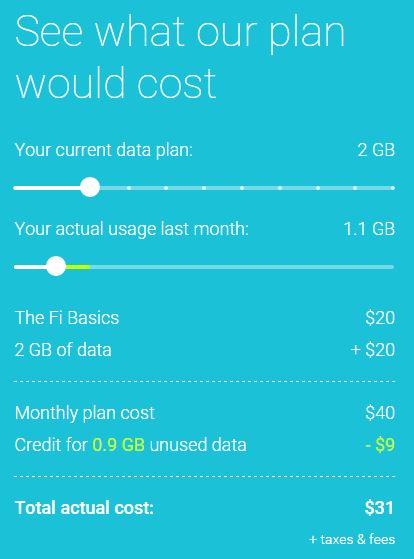 The last interesting feature is basically the same as Google Voice where dialing one number will allow you to get calls on your phone, tablet and laptop. Of course, your other devices will have to run some type of software that Google will provide and be connected to Wi-Fi. If Google could also provide an Android app, you would be able to get calls on your other phones if you have Wi-Fi connection. That might be an interesting feature but I’m not sure Google would want to do that.

All in all, Project Fi would be a great plan for people who rarely use their data, like your grandmother, or a backup phone that you rarely use. For most people, not being able to use the latest iPhone or Samsung will be a deal breaker. And that’s not to even mention that you will have to buy the Nexus 6 for $650. So what happens if you decide to cancel? Will the Project Fi SIM allow me to go back and forth between Sprint and T-Mobile with the same phone? That would be interesting.

But mostly, this is Google’s way of forcing the big carriers to change the way they charge for data. Nice work Google.