Back in September of 2014, Fuz Designs announced a bluetooth controlled padlock called Noke. After several delays, Fuz has finally started shipping units out and you can now buy it online for $69.99. I hope “good things” come to those who wait.

The first thing I noticed was how heavy and sold the lock felt compared to the cheap Masterlock combination lock I use. But it’s also bigger and thicker than those cheap locks, which might be a problem for some users with space problems.

The second thing was that I wasn’t able to get the lock out of it’s packaging. I know this sounds ridiculous, but I later received an email from Noke explaining how to open the package. Packaging shouldn’t require instructions.

To get started, I downloaded the Noke app and followed the instructions. However, on my first try, the app seemed to get stuck looking for my Noke (left below). After re-trying, I did manage to get the app the recognize the Noke. One of the first things you need to do is to set the “quick-click” code. This is a “morse-code” like short and long clicks you can do with the lock to open it in case you don’t have your smartphone. This information is sent to the lock and is remembered by the lock so it could be used without a smartphone (middle below). By the way, the Android version of the app does not have the “Notifications” working yet.

As you can see below, on a normal locker, the lock fits very nicely with plenty of space left over. 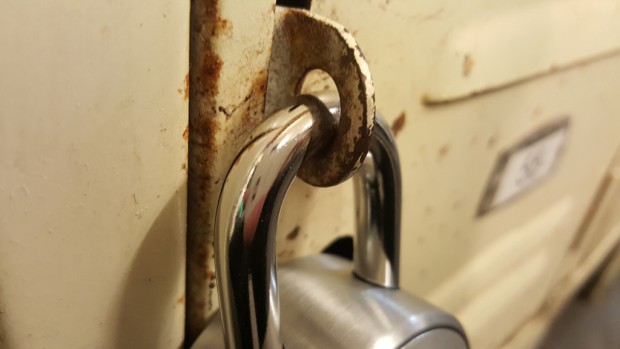 However, on the locker shown below, the hole that the lock goes into was too small the the lock would not go in. Being the stubborn life hacker that I am, I used a Dremel portable drill to make the hole bigger. Of course, this does point out the fact that I could have used the same drill to break into the locker and not even worry about the lock. Also, as you can see, the lock is very large in proportion to the indentation and indeed, makes it hard to place on the locker. 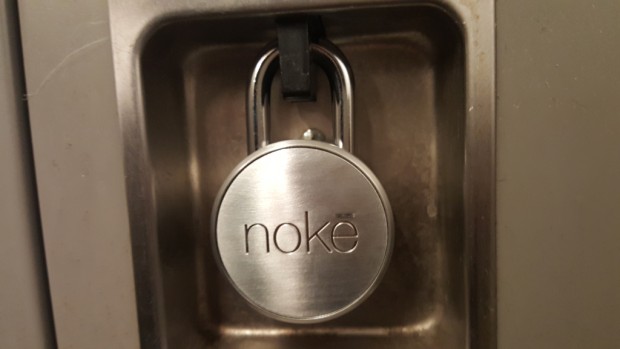 There are 2 modes that are available in the settings. To open the lock, you click the lock and the LED will come on indicating that you have done so. One method forces you to confirm on your smartphone that you want the lock to unlock, and the other setting just opens the lock. Or at least that’s what is supposed to happen.

In reality, I have to launch the app and have it connect to the lock first. Then, when I click the lock, it will open. Once they are “paired,” then you can simply go up to the lock and unlock it without having to re-launch the app, assuming you have not re-booted your smartphone. I’ve been using it for a few weeks and unfortunately, sometimes the app will get stuck trying to connect and often will lock-up and I will have to re-launch the app to get it working. This procedure sometimes takes so long, it’s literally faster to use the “quick-click” and not even worry about connecting to my smartphone.

This is clearly not as fast as I was hoping it would be to unlock my locker. Even when everything is working properly, it still takes about the same length of time as having to take out a key. And when it’s not working properly, it’s much slower than even a combination lock.

All in all, if you are having to share a locker with others, or if this is for a public locker that you want to give access to many people, but be able to cancel their access, this is the perfect lock for you. Also keep in mind that the history will tell you who went into the locker and at what time. However, if you are getting this lock just to save time, this probably not the right solution for you, especially considering the extra cost.

Update 9/30/2016:
There was an update to the app and that caused my Noke lock not to unlock for some reason. Trying to contact Noke via website email did not work. Calling them at 385-645-4567 did work and they told me to clear the app cache, then un-link the lock from the app, and re-add it. That did the trick and everything is working again.

2016-01-29
cochinoman
Previous: AT&T Store of the Future Opens in Westwood
Next: Get Free 2Gb For Your Google Drive