Since I don’t do a lot of shopping, I never saw this vending machine before.  Perhaps, it’s all over the place but I’ve never seen it.  I found this at the Westfield Century City Mall, or whatever it’s called now, near the AMC movie theaters. 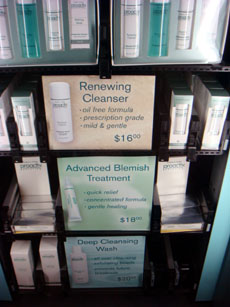 It looks like a large sized vending machine but it’s a lot more complicated than that.  Not only is there a touch screen on the right, plus a credit card swipe, there’s also another monitor showing demos on the upper left.

Also, the products don’t fall off the edge like a regular food vending machine.  A robotic arm actually picks up the product.  This same technology could be used to sell anything.  I guess we’re only one step away from getting rid of cashiers altogether.

I didn’t buy anything so I’m not positive how it works but it looks like something they would have in Japan.  They love robots over there.

I wish they had 24 hour vending machines that rented DVDs and video games.  I guess with downloading, renting DVDs will be a thing of the past very soon too.