When you have a laptop that you move around a lot, and like using a mouse (instead of the built in Touchpad) it becomes a pain to have to plug the receiver in and out of the USB port.  After a while, you can feel the USB port starting to feel like it’s getting loose. 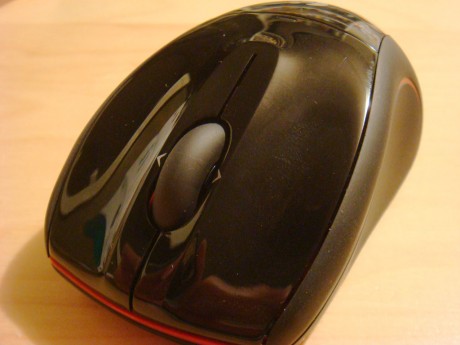 What’s cool about this mouse is what Logitech calls the “Plug-and-forget nano-receiver.” 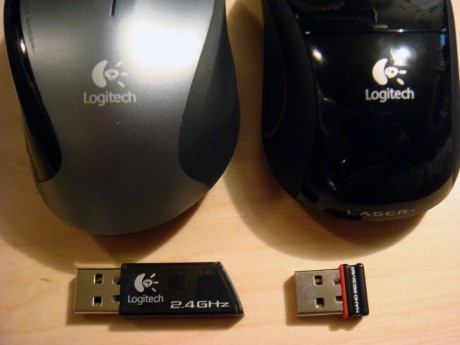 The picture above shows the Logitech VX Revolution on the left, and the V450 nano on the right.  The VX scrolls faster and uses only one AA battery, instead of 2 for the nano (see picture below).

The VX also has a bunch of other buttons that I never use.  The manual for the Nano says that the 2 AA batteries will last 12 months.  I haven’t used it that long yet but that’s a real plus if true.  I hate having to replace batteries.  There’s also a battery low LED indicator.  That’s a nice touch. 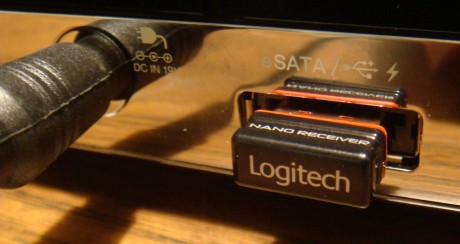 “Nano” receiver plugged into back of Toshiba

The picture above shows how small the receiver is plugged into a USB port on my Toshiba laptop. As planned, I’ve left the receiver plugged in to my laptop with no problems.  Plug-it-and-forget-it.

Logitech claims that the 2.4GHz cordless connection is very reliable signal and to put it to the test, I connected my Toshiba’s HDMI output to my HDTV and controlled the laptop with the Nano mouse from across the room.  Everything worked as advertised.

I’ve only been using it for a few weeks but I love the plug-and-forget it reveiver.  But this tiny revceiver has made me think why the laptops don’t just come with this built into the unit.  They have the Wi-Fi built in. Why not this?  I guess there’s no good standard.  Standards are good for something.  This would be one case of that.

For me, this is a no-brainer.  Anybody with a laptop, using a wireless mouse, should get this mouse.  There’s no downside, and it works great.  I highly recommend it.

Previous: Toshiba Qosmio F55-Q502 Laptop – Review
Next: My Attempt at Moving to Vista