Last time, I compared the iPhone 4 and Palm Pre’s hardware and the iPhone 4 came out on top. However, the Palm Pre is older. So perhaps, the comparison isn’t completely fair.

This time, we’ll compare Palm’s WebOS vs. iPhone’s iOS mobile operating systems. The iPhone’s operating system came out several years before WebOS, but it has been updated recently so it will be an interesting match.

The biggest difference is multi-tasking. WebOS came out of the box with true multi-tasking. You can open multiple apps simultaneously, just like on your computer. On WebOS, each app is represented with “cards” like a deck of cards. Below, you can see multiple apps open and can be scrolled sideways, and touched to maximize. Pushing the “home” button will minimize the app. 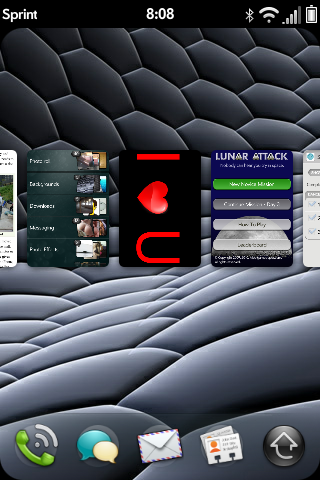 Below, you see the new version of Apple’s iOS, which pretends to have multi-tasking, but it’s more like the ability to “freeze” an app, and return to it later. The app does not run in the background,  like on a true multi-tasking operating systems, with the exception of the iPod and phone apps. By double clicking the “home” button, you get the last 4 apps that were running shown at the bottom of the screen (see below). You can scroll to see even older apps that were running but there seems to be a limit on how far back you can go without the app resetting to it’s initial start-up condition. 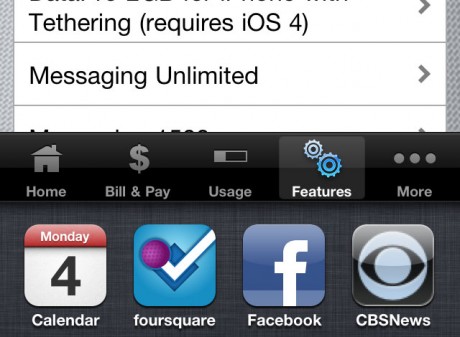 There are several problems with this fake multi-taksing method on the iOS. For one, any application that has not been re-written to work with the new version of iOS will not go into this “freeze” mode and will simply restart when you try to return to the app.

Another more serious problem is that the “freeze” method doesn’t always work even with apps that have been modified. A typical problem I had was when I was running an app that required me to fill a form to register to use. To do so, I had to run another app to recall a phone number or account number, but when I would return back to the “frozen” app, it was no longer at the form and would revert back to the previous page. I assume this is because switching apps caused the first app to think that I did not want to register.

Going back and forth between apps is a very common thing to do and this “fake” multi-tasking on iOS barely works for simple apps like the browser or other apps that have static pages when switching apps.

Another big difference between the 2 operating systems is how events are handled. On WebOS, when an event occurs, an alert appears at the bottom of the screen. Below is an example of how a text message is shown as an alert. 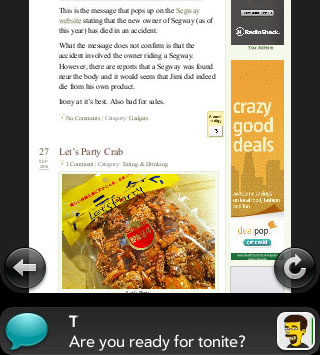 Notice that the app image (the browser) shrinks slightly vertically, so that the alert can be seen at the same time as the app. This is because the app continues operating and the alert will shrink to a smaller size if ignored. But the user can continue working with the app.

However, on the iOS, alerts are basically pop-up dialog boxes. Below is an example of a text message that causes the pop-up to appear. 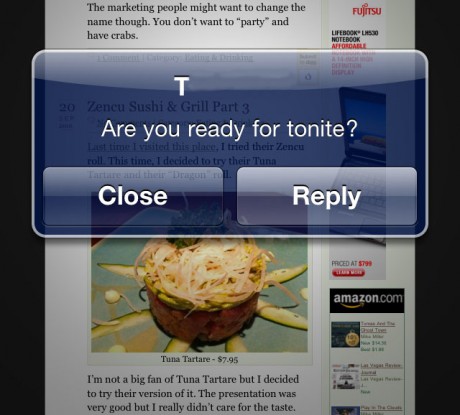 It’s bad enough that the pop-up appears, like one of those SPAM pop-ups on your computer, but it requires the user to close the dialog box, or switch to the app that is causing the pop-up to appear. This action is very disruptive and not intuitive at all. One of the worst situations for this is during an interactive game. Right in the middle of the game, you’ll get a pop-up, stopping the game, then after returning from the alert and back to the game, it often does not continue properly. For a gadget freak that’s used to using multi-tasking on computers, this solution is simply unacceptable.

Next, the on-screen keyboard of the iPhone vs. the physical keyboard on the Palm Pre will be evaluated. 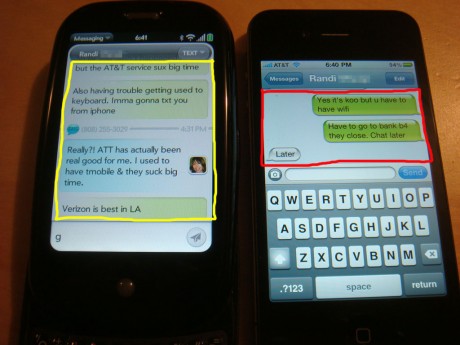 As you can see from the picture above, the area of the screen available for text message on the Palm Pre (left, shown in yellow) is much larger than on the iPhone (shown in red), because there is no on-screen keyboard. If you turn the iPhone to landscape mode to get a larger keyboard, you basically can see one line of text. It’s almost unusable in that mode.

Regarding the on-screen keyboard, everyone that has an iPhone told me that I would eventually get used to using it, but I was never able to get to the same speed as using the physical keyboard on the Palm Pre. To top it off, the auto-correction feature often causes the words to be changed and if you don’t notice it, it can lead to some very embarrassing messages. Be careful.

Conversely, there are tons of free apps that are very useful on the iPhone, like Paypal, Qik, Chase Bank, Square Up, Google Earth, redbox, and Photoshop Express, that are not available on the Palm platform, for free or even for pay. This is where Apple kicks Palm’s ass badly. How can Palm pretend to be a real competing platform when they can’t even get Paypal or redbox to write apps for them?

The WebOS multi-tasking is clearly the winner. I personally like the physical keyboard over the screen keyboard that takes up 3/4 of the screen. But if you must have access to a specific app, but it’s not available on the Palm, everything else becomes completely irrelevant. So this comes down to which apps you need. If the apps you need are available on the Palm, then for you, Palm wins. If not, Apple wins.

Lastly, the iPhone is currently only available on the AT&T network. The Palm Pre is available on Sprint, AT&T, and Verizon. I have used all 3 of those networks and Verizon has the best coverage in Los Angeles. Spring has 4G in some areas but not in Los Angeles. AT&T’s network is the worst of the 3. While in Vegas, I used both phones and AT&T was always worse than Sprint and at the MGM, I got absolutely no reception on AT&T while I got perfect reception on Sprint.

Moreover, Sprint gives away the turn-by-turn Navigation at no charge. On AT&T, the exact same app will cost you $10 per month. Not a big deal for most people but I hate throwing away $120 per year for no reason.

This entire exercise has turned into a nightmare for me. There are certain apps on the iPhone that I really like, but I hate the on-screen keyboard, and the AT&T reception. Currently, I carry both phones which is really not a good solution. If the iPhone was available on another network, at least I would feel safer just carrying the iPhone. But the reception on AT&T is so bad that I just don’t trust it.

So who wins this contest?  I’m not sure. All I know is that I lost because I have to carry 2 phones and pay for 2 service providers. Not cool.

Perhaps the solution is to go to the Google Andriod, which does have many of the important apps, but is available on all service providers and with many hardware options, including some with physical keyboards.

More phones in my pocket. Just what I needed.