While playing at the 2012 WSOP, I dropped by Social House which, as the name implies, is more of a drinking place than an eating place. But I was hungry so I was ready to do some eating. The Sunomono was acceptable and prepared properly. Personally, I like it a tiny bit more vinegary but most people probably would like it. Next was my Ramen Noodles as shown.

The noodles were not anything like the ramen that I like and nothing about it was done properly. Even if you’re drunk and starving, I’d pass on this soup and pickup a Cup-A-Noodle at a 7-11 instead.

The vegetable roll was edible and compared to the Ramen, much better. It’s still not much better than what you might pickup at a Ralphs grocery store but at least it tasted like a sushi roll. 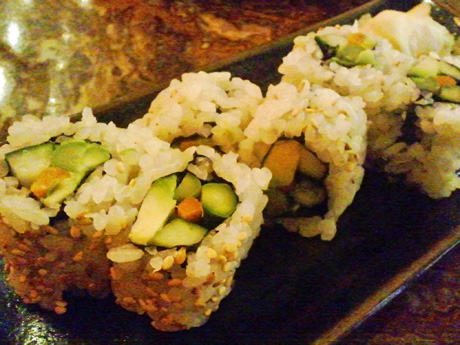 Actually, what was worse than the food was the service. I had to ask them to clean the table because there was soy sauce spilled on it. When I ordered hot green tea, it came in a pot. I like that. But when it was brought out to me, he did not pour it into my cup for me. Very strange. By the way, the hot tea was $7.

This type of neglect should never happen at any restaurant. Not even at Denny’s, let alone a place like this.

All in all, if you want to drink and do a little social eating, you might come here. If you’re looking for anything authentic or delicious, give this place a pass.