After proclaiming that I would’t be getting the new Samsung Galaxy S6 only 25 days ago, I’ve already changed my mind after finding out that Samsung claims the internal battery should last 23 hours. If true, that would almost eliminate the need for being able to swap batteries. Of course, there’s always the problem of waking up somewhere and realizing you didn’t charge your phone. Previously, I would just go to my car and swap the battery with a fresh one. No can do with the S6.

The lack of a microSD slot can be alleviated by purchasing the 64G or 128G versions of the S6 but apparently the 128G version will not be out for a few extra weeks (see below). Another strange anomaly is that on the Best Buy’s website, both 64G and 128G units are $399.99 with a 2 year contract on Spring. WTF? 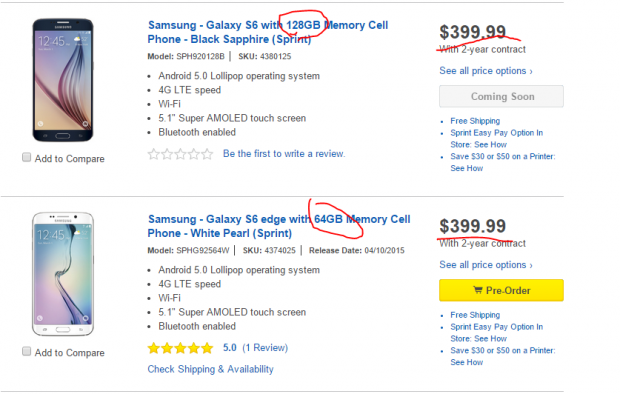 To top off the already strange purchasing session, at the end when I tried to “Add to Cart,” it replied with the red “We could not add your items to the cart. Please try again.” message (see below). And yes, I tried again with the same results. 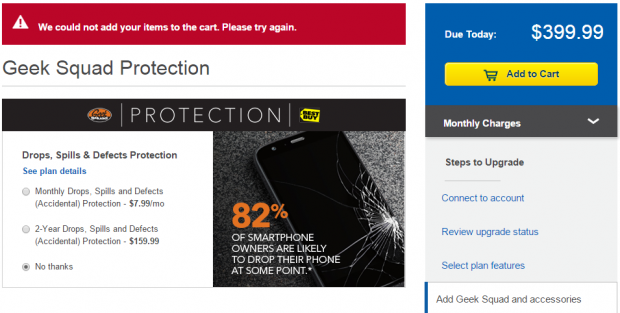 Perhaps by the time you read this, things will be fixed up on the Best Buy website. It doesn’t even surprise me anymore when things like this happen. It like shoplifting and credit card fraud. It’s just the cost of doing business.

Updated March 28, 2015:
The next day, I went to Best Buy in person and pre-ordered the Samsung Galaxy S6 Edge. The weird thing is, you still have to pay $50 upfront, but they give you a $50 Best Buy gift card. I guess they figure some people will lose the card and they’ll get to keep the money. Also, make sure to have them separately order the free wireless charging pad for you. It’s not automatic.