Why I Pre-Ordered The Samsung Galaxy S6 Edge

You may have noticed that when the details of the S6 first came out March 1, I quickly announced that I was not going to be upgrading to it. After reading the full feature details, and playing with one at Best Buy, I have changed my mind. In fact, on the first day of pre-order, I tried to get one from Best Buy online with no success.

As I wipe the egg off my face, let me explain my reasons.

My 2 reasons for not getting one were, no microSD expansion and no removable battery, both features available on my Galaxy S5.

After analyzing my current usage, I calculated that I am currently using 17Gb of storage. Frankly, I would have gotten the 128Gb version of the S6 Edge if it were available for pre-order but it’s not. So I decided to opt for the 32Gb. For some people that keep all their pictures and video from birth, that might not be enough. For me, 32Gb should last me until my next phone.

As for the removable battery, there’s no getting around it. Samsung claims that the battery can be charged in 10 minutes for 4 hours of use, 30 minutes for 50% charge and 1 hour for 100% charge. It’s still slower than switching batteries, and you need an outlet. How many times did I laugh at iPhone users panicking because their battery was dead. Will that happen to me? I guess I’ll find out about a day after getting my S6.

But the real reason for changing my mind was when I actually played with the S6 Edge at the Best Buy store. The S6 Edge is remarkably sexy, especially compared to my old plastic S5. It has the same solid feel as the iPhone and the beautiful Super AMOLED 2,560 x 1,440 resolution (577 ppi) screen wrapping around gives a feeling of infinity. 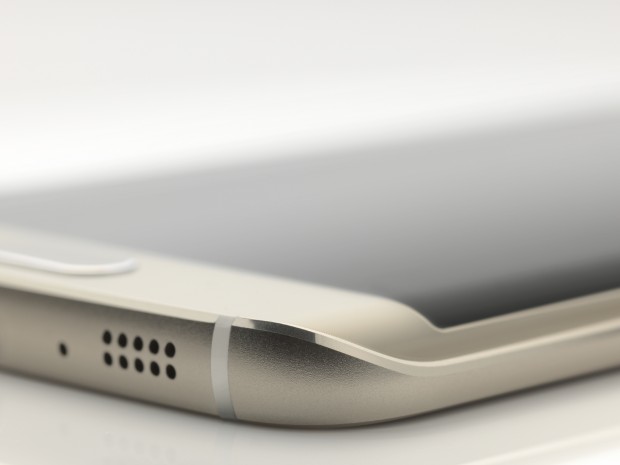 The next thing I noticed was how snappy the S6 was. Navigating was noticeable faster than my old S5. A new feature is being able to double push the home button to get the camera app, which comes up almost instantly. The camera app on my old S5 comes up so slowly, I often don’t even bother trying to take a picture because I know the event will be over by the time it comes up. The S6 improves the camera with optical image stabilization and a brighter f/1.9 appature.

Speaking of the home button, the S6 now provides fingerprint IDs by putting your thumb on the button, just like on the iPhone. This is great because the S5’s swiping of your thumb cannot be used with one hand, and often doesn’t even work properly.

Also, my complaint about the S5 requiring a separate purchase of the wireless charging back has been answered. Now, the S6 comes with it built into this thin unit. It’s strange because the charging back for the S5 made the phone thicker. Yet the S6 is thinner with it built in. I guess not having a removable back has it’s advantages. By the way, Best Buy gives you the charging pad for free if you pre-order your S6. But be careful. They have to separately order that for you and it’s not automatically ordered.

Last on my list of surprises is Samsung Pay, which is Samsung’s leapfrog answer to Apple Pay. Even my old S4 already had Google Wallet 2 years ago using the built in NFC (Near Field Communication), so Apple’s announcement wasn’t very exciting to me. Why do I use the word leapfrog about Samsung Pay? Because they use LoopPay‘s MST (Magnetic Secure Transmission) patented technology. Amazingly, LoopPay in Boston figured out how to allow your smartphone to work with existing magnetic stripe reading credit card readers. So instead of the 300,000 NFC readers available in the U.S., it’s more like 90% of all credit card machines. The ones where the credit card enters inside a machine won’t work, but all others should. By the way, Samsung bought LoopPay last month.

Stores like CVS and Rite-Aid no longer accept Google Wallet or Apple Pay because they have their own competing system called CurrentC coming out. Will they accept Samsung Pay when it’s released in the Summer? We’ll find out.

So on April 10th, or maybe even April 9th at midnight, I’ll get my Samsung Galaxy S6 Edge from Best Buy. You know there’s more reviewing to come.