Recently, I decided to use Uber instead of a taxi to get home after dropping off my car for maintenance. As advertised, it was cheaper than taking a taxi because it was not during peak hours. When I was using the app, I noticed there was a plate icon at the top, to the right of the car icon. Touching it brings up the Uber Eats section of the app (see left below). You can only order from their limited menu, and only during the specific lunch and dinner hours.

Using the app is simple but getting the service to work is not. The first time I tried using it, there were no drivers near me so after waiting a few minutes, I canceled my “order.” Not deterred by this, I tried again after a few weeks. This time, I tried right when dinner started at 5pm and managed to get a driver right away. The app shows how far your driver is (like the regular Uber) and now many minutes it will take them to get to you. In my case, it took 8 minutes total.

The app notified me when the driver was about 2 minutes away and I went outside to pickup my food. As you can see below, the Chicken Pad See Ew did not look exactly like the picture shown, and the noodles had stuck together, but it was acceptable for delivered food. 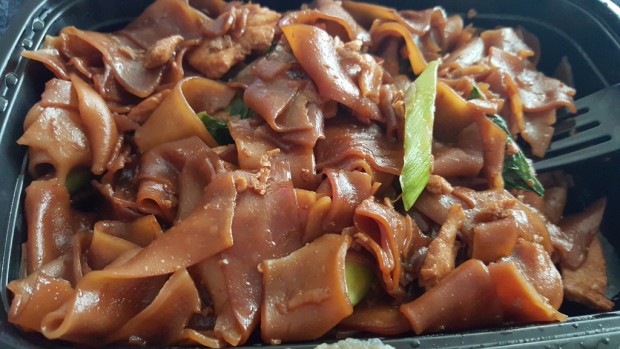 Right after the delivery, I got an email showing that I paid 90 cents in sales tax and $3 in delivery fee, for a total of $13.90. Since I only ordered one item, it’s not as cost effective as ordering a bunch of stuff.

Once thing I noticed was, when I looked at the same item later, the cost had gone up from $10 to $12 (see below). Apparently, Uber uses surge pricing on their “Eats” service, just like their regular driving service. So the lesson is to order early before dinner time.

Frankly, there are so many delivery services available, including the restaurants own delivery service, that I’m not sure I need yet another way to have food delivered. Moreover, the Uber Eats service is very limited with their menu for now. For most people, I think that’s a deal breaker.