Jared asked me for more information on the battery on my new Dell Studio 17.  Being the OCD Rain-man that I am, I decided to conduct some testing and document the result here for your reading pleasure.

So to begin, I found out from Dell that the Studio 17 from Best Buy has the 9 cell battery (instead of the 6) which means it’s the most you can have on this model.  Next, I selected the “Dell Recommended” power setting as shown below:

Next, I enabled the “Dell Extended Battery Life” in the Battery Meter.  I’m not 100% sure of everything that this does but it only applies when you are running on battery and it changes the color scheme to “Windows Vista Basic,” which may not work with all your programs.  It also turns off the Windows Sidebar (which I guess uses up battery power). 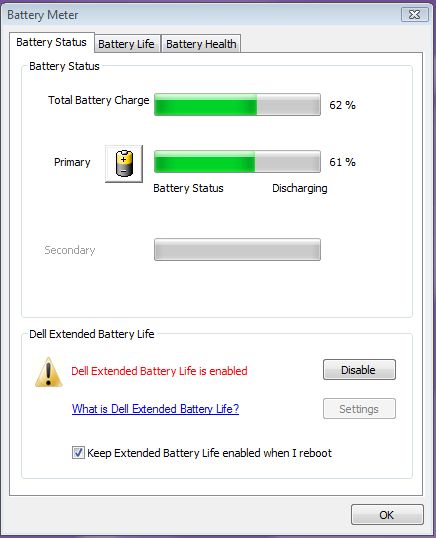 Instead of conducting this test with a fully powered battery, I decided to try to simulate what I would normally do in real life. After max-charging it on Friday night, I let it sit over the weekend without using it. On Monday, when I turned it on with battery power, it was down to 91% battery charge level. I figure this is probably the longest you would go without turning on your laptop after a charge.

During the testing period, I backed up approximately 300 files over WiFi to my Buffalo NAS, copied files to my desktop via WiFi and did other light processing, including using the browser.  What I specifically did NOT do was use the DVD drive at all.  So if you plan on watching a DVD movie, this power test probably will not apply to you.  If you are going to be using it to create and edit Word files, email, and browse the Internet, this power test should be almost exactly what you will get.

The table below shows the battery level (from the Battery Meter) as time progressed (shown in hours and minutes).

As you can see from the table, near the end, the battery level goes down fairly quickly.  From 15% to 7%, it only took 11 minutes, then down to 5% in just 2 more minutes.  At this point, the system turned off automatically.

Once again, keep in mind that this test started from 91%, which was where the level was after not using the computer for 2 days.  If it was charged right before use to 100%, and you set the power setting to “Power saver,” I’m sure you would get a lot more time from the battery.  But I don’t think those results are useful when you are using the computer in real-life situations.  I like longer battery life, but I hate slow computers.

My results show that with moderate use and with the screen on for the entire time of testing, and connected via WiFi, you can get about 3 hours of battery life, even if you start with a slightly less than full chage.  In my book, that’s a pretty good length of time.