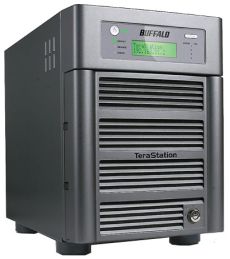 After loading up on thousands of MP3s, movies, downloaded pr0n, old VHS conversions, and copies of DVDs, I finally ran out of room on my 160Gig hard drive on my HP Media Center.

Realizing that Microsoft is coming out with their Windows Home Server later this year, which HP and other OEMs will produce hardware for, I wanted to wait a little longer. Unfortunately, the space crunch really got bad and I had to break down and get a NAS (networked attached storage) device right now.

After looking at the Imoga, Maxtor and Buffalo, I decided on the 1TB TeraStation Live from Buffalo because of the built in RAID (0, 1, 5, or 10) feature. It’s more expensive than the other ones but I didn’t want to worry about backing up a 1TB device to a… I don’t know what.  The RAID feature allows for bad drives to be swapped out when a LED warning light comes on.  Nice.

Also, the front panel LCD is a nice touch and shows the status of the device, and even the RPM of the fan.  The lower front literally opens up to reveal the 4 hard drives which can be removed without screw drivers.  They really thought this thing through.

Setup was easy and all I did was plug it into my UPS, connect the Ethernet cable to my router and it was working automatically. Like a network router, you access it’s settings via a browser and you can pretty much set it to do anything you want, including automatic backups.

The TeraStation also comes with a bunch of other features that help with media serving, including interfacing with iTunes and other Buffalo devices for streaming media to your TV, and such.  I’m primarily going to use this devices as a storage and backup device so I haven’t checked those features out yet.

The device comes with a backup software called Memeo, which basically allows you to backup your computer in the background to the NAS (or any other drive).  It’s nice because, unlike some backup software that schedules the job at a particular time each day, this software always watches for files that need to be backed up automatically.

Another side benefit is, when I bring my laptop home from work, and it connects via WiFi to my home network, it automatically saves my work wireslessly to the TeraStation. Now, I don’t have to connect my external USB hard drive to backup the laptop.  Since I was too lazy to backup my laptop most of the time, this feature is worth the price by itself.

Hopefully, I’ll never need the backup features, or the RAID feature but now I feel ready for anything.