The time came to improve the security in my house but I didn’t want to have to carry more keys. After looking around, I found an electronic keypad door lock on the Schlage website and got it at OSH nearby. Just by chance, they had a President Day sale and I saved $50 off the MSRP, which according to Amazon is $278. It was $150 at OSH minus the 50 bucks.

Back baseplate with 9v battery

Installation was pretty simple. Just remove the old lock, place the keypad on the outside of the door, and the baseplate shown above on the inside. Connect some wires and plug in the 9V battery as shown above. 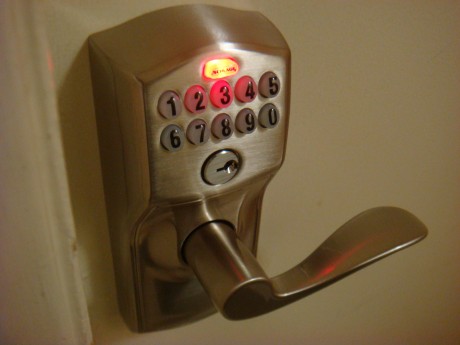 After screwing in the back onto the baseplate, it’s done. Instead of reading the paper instructions that comes with the unit, just watch the Youtube installation video, which shows you step by step, how to install the lock. Their full user guide can be found here on their website.

The lock allows you to add new 4 digit passcodes or delete them using a master 6 digit passcode. There is no way to change the master code. You can also delete all passcodes if you screw up and want to start over. You can store up to a maximum of 19 codes, which should be more than enough for any normal user. Remember, there is no LCD or LED display so you have no idea how many codes you have added unless you write everything down.

There is also no way to know which code was last used to enter, or any other logging security feature. This feature would not be too difficult to implement if the unit had a tiny LCD display.

According to Schlage, with normal usage, the battery should last at least 3 years. I’m not sure what normal usage is but if true, would be a long enough time that it would not be annoying.

One thing missing is backlighting on the keys while you are typing in your passcode. There is actually a light there but I’m assuming that they don’t want to drain the battery by lighting up the keypad on each use. Basically, what this means is, you’d better have a flashlight if you’re trying to use this in pitch darkness. For me, since I have it inside, it doesn’t really matter but if you have it outside, it might matter to you. [A reader commented that by pressing the top logo button, the entire keypad lights up in blue, which I have verified.]

It hasn’t been very long since I installed it so I haven’t used it much. So far, I’ve had no problems with it.