Since discovering the SugarFish in downtown, I’ve been going there repeatedly, so I decided it was time for a change-up.

Takami Sushi & Robata is a trendy Asian fusion type restaurant located on the 21st floor of what appears to be an office building. It’s also on the same floor as a trendy night club called Elevate, which is probably owned by the same company. So when you get off the elevator, make sure you are going in the right direction or you’ll end up dancing and drinking instead of eating and drinking.

Although the 21st floor doesn’t make this the tallest building around, you do get a spectacular view of the downtown area (including the top of the Standard) and there are tons of patio seating, where smoking might be allowed. Luckily, we were there early so nobody was smoking.

While there was no way I was expecting free green tea here, it was $4. This should tell you how much the rest of the meal will cost.  The waitress explained to us that there are actually 3 kitchens at this restaurant (Rabata, sushi/fish and “other” kitchens). Interesting setup. No wonder it’s so expensive here.

By the way, Robata is a Japanese charcoal grill cooking style, which is apparently different from the open flame method for Yakitori. To be honest, I’ve never heard of this type of Japanese cooking before and was ready to try it out.

We started off with our usual Edamame ($4) which was slightly overcooked. I’m being very picky but considering the upscale ambiance, I was expecting perfection.

When asking the waitress about the Sunomono, she said it was enough for 2, and she was right. Compared to what I’m used to, this is a ginormous portion and I’m glad the waitress warned me. Unfortunately, the Sunomono was very mild and almost tasteless. Obviously, this is not anything close to traditional Sunomono by any stretch of the imagination. 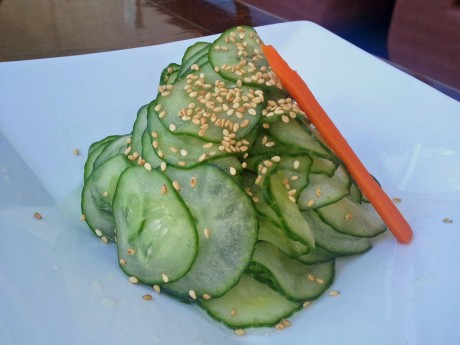 Next, I had to try the Robata so I got the Lamb and New York with Asparagus. They don’t ask you how you want your meat cooked, so apparently they cook it the same way for everyone. For me, the New York was over cooked, but keep in mind that I take my steaks medium rare. This was well done at best. However, the spices used were tasty and the Asparagus was fine. The Lamb was a little dry and actually not as good as the lamb I had in Vegas.

So far, I’m not impressed.

Next comes the real test. I ordered the Sushi plate, which comes with a variety of different nigiri sushi and your choice of California roll or spicy tuna roll (which is what I picked). Although everything was fresh, there was nothing here to write home about. The plate does come with some type of grated wasabi on a cut cucumber. It’s interesting but I didn’t really enjoy it. I’m not sure if you’re supposed to eat it with the sushi, or put it into your soy sauce but I ate it straight and it was definitely wasabi.

One thing that I liked was the Tako (Octopus) was sliced extremely thin. This is not the traditional way the Tako nigiri is prepared but I liked it because it wasn’t chewy as it normally would be. There was also some type of ponzu sauce that had an apple taste to it. My friend loved it but I hated it. I like my ponzu sauce traditional and having a sweet apple taste is not to my liking. 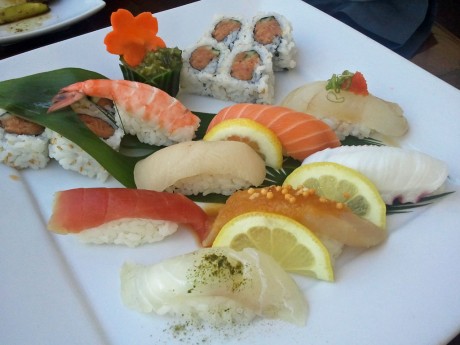 We also got a Dragon Roll, which was again very ordinary and nothing worth noting. 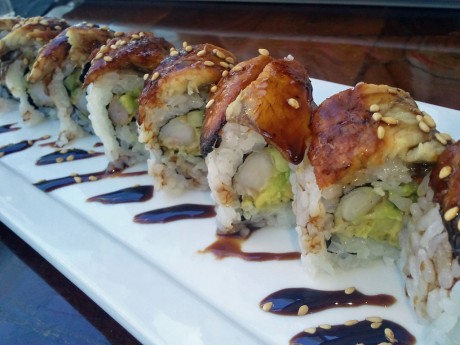 Since this place is on the 21st floor, we had to try the 21st Roll. To be honest, I was getting full so I didn’t partake this roll but the crab on top did look good and my friend said it was good. 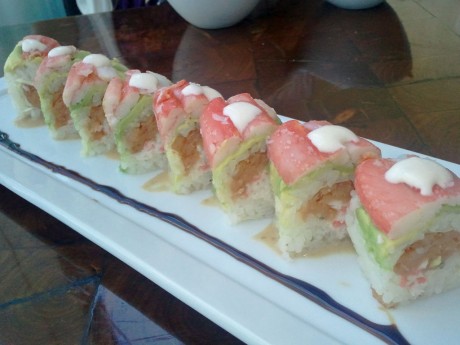 Even though I was pretty much full from this big meal, I managed to take a few bites of desert, which in my opinion was the only really good item we ordered from the entire meal. That’s sad because I was hoping to find another gem of a place like Sugarfish.

All in all, I was very disappointed with this place. The view and desert were the only things that I enjoyed. Frankly, even the slightly overcooked Robata was better than the sushi. I don’t think I’ll be returning here any time soon. However, this place made me want to try other Robata places.