Last Wednesday, Apple announced the “new” iPad. In case you’re living under a rock, this one has a better camera, higher resolution (2048 x 1536), and most importantly, a retina display. I was impressed with the retina display on the iPhone 4, so this large screen should be fabulous.

After years of pretending the tablet market was a fad, and seeing the new features on the iPad, I’ve decided to get one like everyone else. I’ve justified the purchase by creating an excuse of needing an iPad to test the compatibility of my websites. On top of it, just like the eBay commercial, I’m getting sick of being the only person at work that doesn’t have one. Do I really need one? I’m not sure. I’ll find out after I get one. There are a few iOS apps that I used to like on my old iPhone that would be nice to have again. Don’t ask which ones. It’s just another excuse I’m using to get one.

This new iPad also comes with the option of 4G LTE from AT&T or Verison. There’s a rumor that one is coming later to Sprint, but that’s down the line. Do I really want yet another carrier to send me a monthly bill? I decided I’ll re-activate my Sprint hotspot on my phone and use the WiFi on the iPad to connect to the Internet via my phone. I’ll keep you posted on how well this works.

After pre-ordering from the Apple website, I got an email with my UPS tracking number. According to the UPS website, my iPad should arrive on Friday, March 16 (the official release date of the new iPad) from EPZ, China. Where is EPZ? Apparently, EPS stands for Export Processing Zone. And how do they time the delivery down to the day? I guess they know what they’re doing. 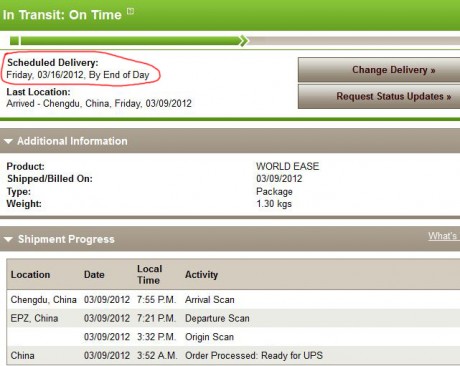 There are some news reports that if you try to pre-order your iPad at this point, you will not get it by the March 16th date. Glad I got on the bandwagon early on this one.