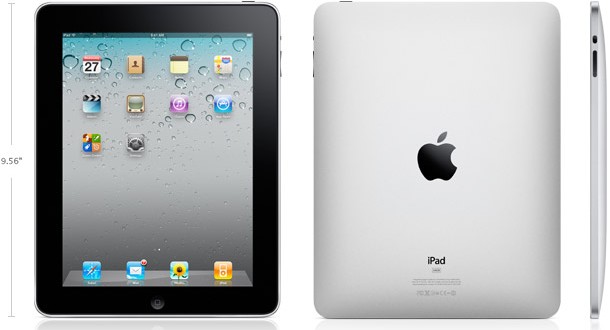 After waiting for the 3rd generation, I finally broke down and bought the new iPad online, which arrived on the day that it was released to the public. Why did I wait so long? I tried to go as long as possible but just like the eBay commercial, everyone at work was making fun of me. Yes, peer pressure got to me. And my carry around Alienware laptop broke so I needed a replacement.

Basically, the new iPad looks and feels like the iPad 2, except it’s slightly heavier and thicker. At least that’s what I’ve been told. Since this is my first one, it feels a tad heavy but sturdy and not flimsy or cheap. What I really like is that it’s not flat like the iPhone 4, which I hated because it was difficult to pick it up from a table.

As you can see below, the iPad is smooth and rounded, making it very easy to pickup. The speaker is on the back and is loud enough to hear your Youtube video or movie if you’re in a quiet room. However, if you’re at a noisy environment, you will need to put on your ear buds or headphones. 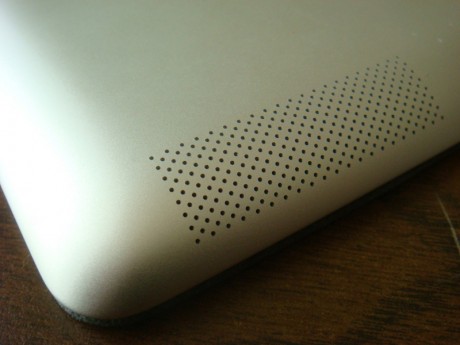 As everyone is already touting, the screen is amazing to look at. Looking at a high resolution picture, and zooming in on a spot has a satisfying feeling that is hard to describe or reproduce in any other way. The CPU is the same speed as the iPad 2 but they have put a faster GPU in there and it’s worth it. Scrolling through pictures and browsing websites are so smooth that it puts many laptops to shame. This is the way all tablets and laptops should feel.

If you don’t have an iPhone or never used iOS, it might take a minute for you to figure out the user interface. Otherwise, everything works exactly the same except the screen is massive in comparison to the iPhone. One thing that I had forgotten is how much better the multi-tasking switching works on iOS compared to Android. On my Samsung Epic 4G, I often find it frustrating when I return to an app and it has restarted and requires me to re-enter data that was already entered. The task switching on the iOS works a lot better, although not as good as Palm (HP) webOS.

One other notable difference is the way cut-and-paste works. If you hold your finger over the text, you will get a magnifying glass to help you select what you want. On Android, the little cursor that comes up is a lot harder to move and place where you want.

One of the first things I got for my iPad was the dock for $30 from Apple. Since it’s from Apple, I figured it was the one to get. Wrong. Unlike my dock for my Epic 4G, which works like a charm, this dock is very hard to use. First, you have to line up the connector with the iPad, which sounds easy but is very difficult to do because there is no physical guide. Next, even when you think you have it plugged in, you’re not sure because the iPad says “Not charging.” More on that later. To make maters worse, the iPad is so big and heavy in comparison to the light dock, it does not feel safe to touch the screen while it is on the dock. This dock is a fail in my book. 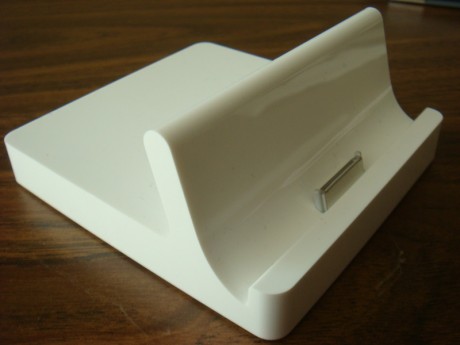 The next accessory I got was the iPad smart cover from Apple for $40. This is a genius accessory for the iPad and is probably a no brainer for most people. It protects your screen, props up your iPad when typing, and props up vertically for viewing videos: All-in-one. If you tap on the screen too hard, it may cause the unit to fall over so be careful.

However, notice the picture below, which shows the wrong way to prop up your iPad with the smart cover. I was doing it this way and it kept falling down until I looked at the sample pictures and realized it should wrap around from the bottom in the reverse order. 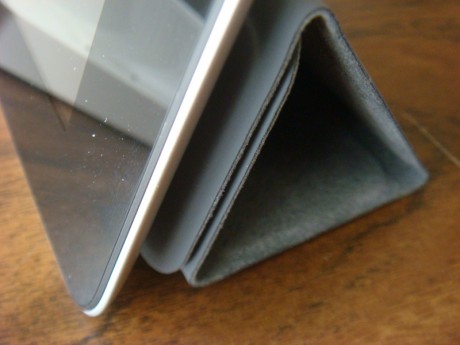 Wrong way to use cover

The on-screen keyboard used in portrait mode is large and easy to use. In fact, I can almost type as fast as touch typing on the iPad on-screen keyboard. If you are holding the iPad up with your hands, you can switch to a split keyboard mode (shown below), which will allow you to use both thumbs to type on the screen. It’s a lot slower but still faster than using one finger.

If you’re too lazy to type, you can use the voice dictation key on the left side of the keyboard. It’s not Siri, but it does work pretty well in a quiet environment. Of course, it’s using a dictionary so it won’t recognize weird or made-up words, but it works pretty well for regular dictionary words. You can also end your sentences by saying “period” or “exclamation.” Of course, if your dictation includes the word “period,” it will get confused. Hell, I’m sure some secretaries would get confused too. 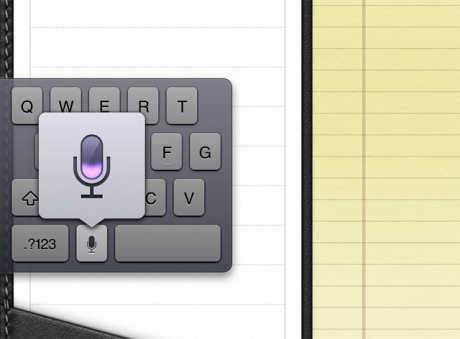 As for battery life, unless you are watching movies for hours, you will easily be able to make it through a day without having to re-charge the battery. In fact, I can make it through several days without charging with my light usage. However, if you let it get down low to nearly dead, an overnight charge will NOT bring it back to 100%. In fact, when you first plug it in, the indicator says “Not Charging.” I’m not sure if this is so that it trickle charges the battery very slowly to help it’s life, or something else weird that’s going on. In any case, this can be a little annoying.

Some users have complained about the unit getting too hot to use. Since I didn’t use an iPad 2 for more than a few minutes, I can’t really compare the 2 versions in this regard. Since the GPU is different, and the battery is apparently bigger, it would make sense that the new iPad would get hotter. I’m so used to using crazy hot laptops that the temperature of the new iPad doesn’t bother me. I also don’t use it on my lap so it’s not touching my body directly.

Just like the iPhone, the iTunes store has enough music, video and apps to keep you busy for months or maybe even years. By now, if you want to do just about anything with your iPad, there’s an app for that. It might not be the iPad version, but you can download an iPhone version and there’s a “2X” button to double the size so you can see it better. No other mobile platform has as many apps.

Speaking of downloading, the way e-magazines and e-books are handled is smooth as silk. This is certainly the beginning of the death of printed news papers, magazines and eventually books. They are going the way of the CDs and DVDs. Why would I buy a physical book when my e-book allows me to do a global search on the entire book in a second? And not to mention carry around all my books with me where ever I go.

Yes, the iPad is more expensive than many of it’s competitors, but sometimes when you want the best performance on the best screen, you have to pay for it. I’m very happy with my purchase so far.