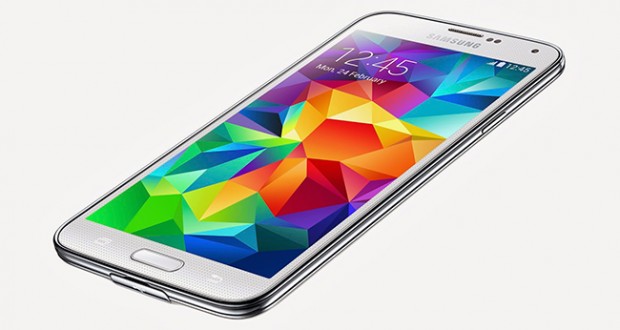 What I Love & Hate About The Samsung Galaxy S5

Back in April, I pre-ordered the Samsung Galaxy S5 without knowing much about it. It’s been a few months and now it’s time to evaluate the latest Samsung flagship smartphone without all the hype.

Let me start by saying that I was very happy with Samsung’s last outing, the Galaxy S4. One of the often mentioned new “features” of the S5 is the finger swiping home button to unlock the phone. Unlike the iPhone 5S which you simply hold your thumb on the button, you have to swipe your thumb down over the button. This is very hard to do if you are not perfectly still or trying to do it with one hand. Forget trying to do it with one hand while walking because you’ll drop your phone.

As you can see below, most of the time, you will get the red triangle with the exclamation telling you that your finger print did not match. And if your hand is sweaty or you just washed your hand, don’t even try using the fingerprint swipe. It simply won’t work. Even the speed at which you swipe matters. Compared to the iPhone version, this is a joke. Of course, you have the option to use the original unlock methods if you don’t like this new feature. It’s pretty obvious that I put this under the “hate it” category. 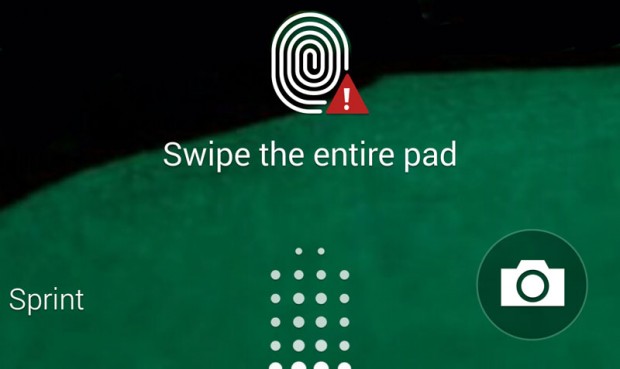 While we’re talking about the lock screen, as you can see above, you can swipe the camera icon up to take a picture without having to unlock the screen. This is one of the best new added features, that I will add to my “love it” list. By the way, you can’t start snooping the photo gallery, so  you’re safe even if you lose your phone.

While on the camera, Samsung has not only increased the resolution from 13MP to 16MP, they have cleaned up the UI to make it less cluttered. That, along with the real time HDR preview, 3840×2160 (4K @ 30 fps) video and faster autofocus makes this one of, if not the best camera on a smartphone. The real time HDR alone is worth the money (works even recording video) and the quality of the pictures are noticeably better than the S4 and iPhone 5S. Frankly, I have not noticed the autofocus being faster, but it seems to have more trouble focusing than on my S4. Also, I’ve never used the 4K video mode because it uses a lot of space and I don’t own a 4K UHD flatscreen TV. Nevertheless, I firmly put the camera hardware and the camera app in the “love it” list. 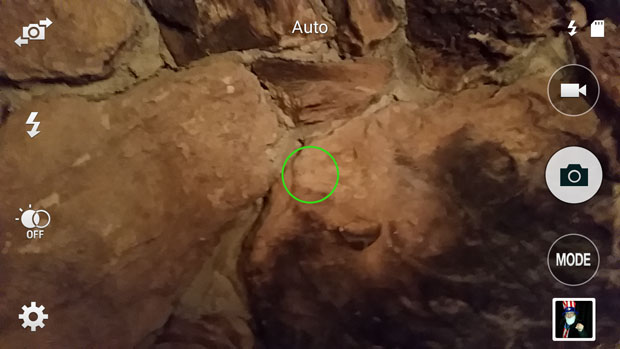 It’s possible that I was the only one using the S-Health to see the current temperature and humidity on the old S4, but I liked this feature. They decided to remove it for the S5, and add a heart rate monitor instead. I don’t know if they made the changes because of the water “proof” feature but I put this on my “hate it” column. Maybe if I was more into exercising, I might like it better. 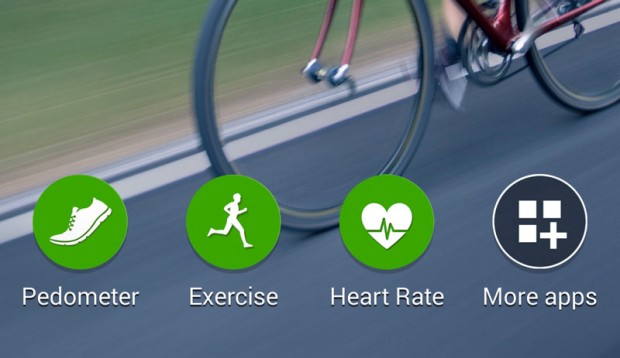 Right below the home button is the USB connector at the bottom of the phone. The S5 is now water “proof” so there is a little cover protecting the connector from water damage (see below). That sounds great except it takes a few more seconds to open this up to plug in the USB, and then a few more seconds to close it after you’re done. So on this one, I love the water proofing, but I’m hating the cover. 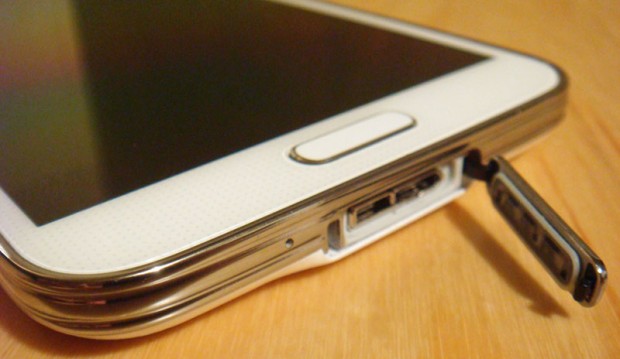 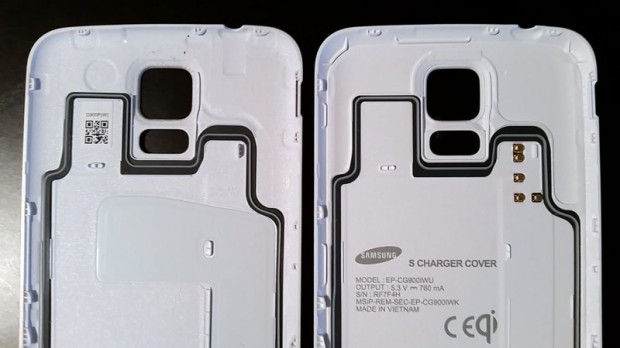 While you’re looking at the picture above, notice the rubber “ring” that makes the unit water “proof”. I know this is a big feature for a lot of people but in all the years I’ve had smartphones, I’ve never dropped mine into the toilet. Compared to the HTC One which has a front facing speaker, the S4 never had good sound. Well, as you can imagine, the S5 with the back facing tiny speaker that is now water protected sounds even worse. What was marginal on the S4, now I consider borderline usable, and has to be put in the “hate it” pile. In fact, it’s so bad, the speaker phone feature is almost unusable. You can help out the poor speaker by cupping your hand behind the phone to reflect the sound forward, but I didn’t buy this smartphone to become a human speaker deflector,

The unit itself is slightly bigger and weighs more at 5.11 oz (vs. 4.59 oz), partly because of the bigger battery (2800 mAh vs. 2600 mAh) and bigger screen. However, the resolution is still the same so you actually get less ppi (432 ppi vs. 441 ppi) than the S4. Because of my bad eye sight, bigger screen, even with slightly less resolution gets my thumbs up “love” vote. By using my trusted JuiceDefender app, I have not had any more battery concerns than my S4, even with the bigger screen.

Even with all my nitpicking, all-in-all, the S5 is noticeably faster than the S4, with a bigger screen, fantastic HDR equipped camera, and bigger battery, makes this a great Smartphone. If you’re happy with the S4, you can stay put. But if you’re looking for a new one, this might just be the ticket for you.