Originally, a OnBeep created this Onyx communicator device so that people could talk to each other like on Star Trek. Somewhere along the way, the name changed to Orion Labs. I’m not sure if OnBeep changed their name or was bought by another company.

In any case, the original units that I got from OnBeep did not work properly so I was procrastinating on writing the review. However, after OnBeep became Orion Labs, they swapped my defective units with new Onyx units. The review below is based on the new units that were sent to me.

Basically, these units connect to your smartphone via Bluetooth and allow you to “talk” to other units, sort of like a digital walkie-talkie. Shown in close-up below is the Onyx showing the USB port (left) and power button. 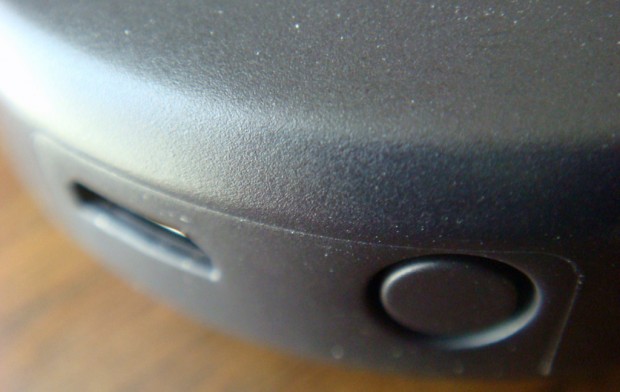 The slider (middle) is a mute switch and headphone jack (right). The holes on the left are where the speaker’s sound comes out of. To the left of that area are the volume rocker switch (not shown). There is an internal rechargeable battery that lasts for about 5 hours of moderate usage. 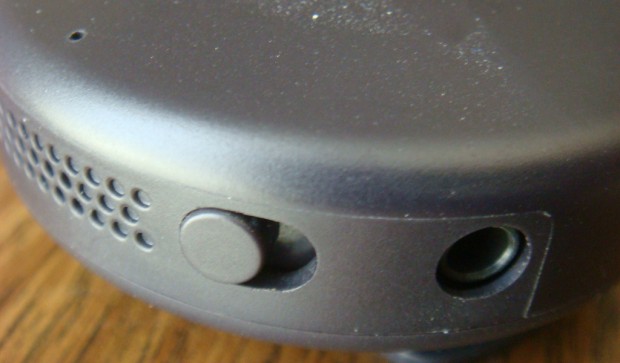 The Onyx has a clip so that you can clip it on your shirt and press and hold the big button on top to talk. The button also has a light ring around it to let you know what the status is.

The app was a little confusing at first but I eventually figured it out. You can create and join groups (middle picture below) and this will help you keep things separated. For example, you could have a “family & friends” group, and a “work” group.

The app also shows where you are located on a map (right below) but other than it being a little creepy, I didn’t really see a need for that. 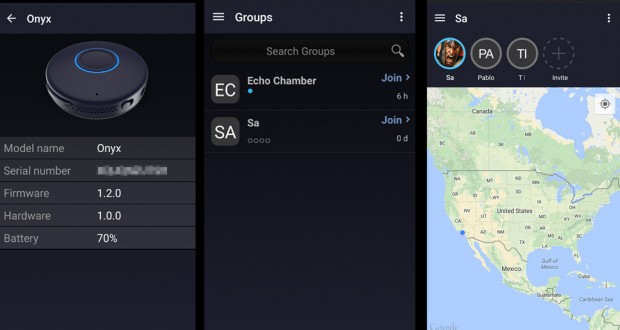 Although the new units worked better than the original units, there are a few problems. Setting up units with your smartphone takes longer than you would think and this would not be good in situations where you have to setup quickly for a job. Sometimes, I had to re-boot the smartphone to get things working again. More annoying was that the units would get disconnected for no apparent reason.

But the deal-breaker was an echo if one or more units were too close to you. For example, in my application, there are security guards with units. If one is standing near me, or next to me, and I do a broadcast, there is a slight delay before my voice is output on the unit next to me. That sound then starts to echo back into my broadcast causing an echo. This was so annoying that I was not able to use the unit. Of course, this doesn’t happen with traditional walkie-talkies because there is no delay.

If you are using these units for applications where the users are far apart, or maybe not even in the same building, for the most part, it might be okay to use, and certainly easier than constantly calling other people, especially if there are multiple users. However, for mission critical applications, because of the echo and disconnections, this cannot be used with any confidence. I’m very disappointed because I had high hopes of buying more units and deploying them.

2016-01-15
cochinoman
Previous: The Room Sushi Review
Next: AT&T Store of the Future Opens in Westwood