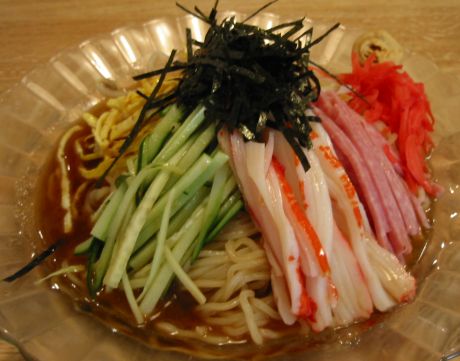 If you ever find yourself in Little Tokyo at 2 am on the weekend, after drinking or strip clubbin’, stop by at Suehiro on 1st Street. It’s been there forever and although the food is more “Mom and Pop” than gourmet, it’s pretty good, especially at that hour. Late night, you can pretty much park anywhere on the street but the police station is real close so don’t park in the red zone. During the day, it’s hard to find parking so park at one of the lots.

During the summer, they have their Hiyashi-Chuka noodles. If you like noodles and want something different, try it out. I love their sauce that it’s in. Hmmm. You can also get “Somen” noodles, which are very think cold noodles.

For desert, ask if they have their home-made Japanese style flan. It’s a little like the Mexican flan, if you’ve ever had those. They are often out of the flan but it’s a nice meal closer if they have it.