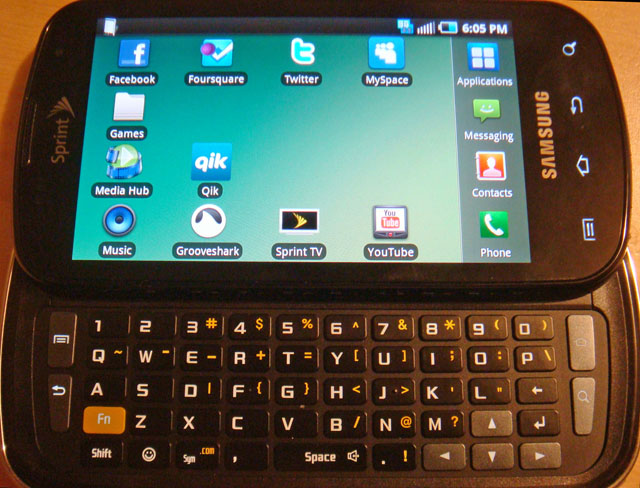 Well it happened. I dropped my poor Palm Pre and it became intermittent. As you may know, I’m not happy with the on-screen keyboard on my iPhone, so I decided to go ahead and try an Android phone from Sprint and got the Samsung Epic 4G.

Sprint requires you to upgrade your account with a cost of $10 per month which is required regardless of if you want 4G or not. If you want to use the hot spot feature, which allows you to use your phone to connect your laptop to the 4G network, that will cost another $30 on top. The hot spot feature is not required so the minimum upgrade cost to your account is $10 per month. 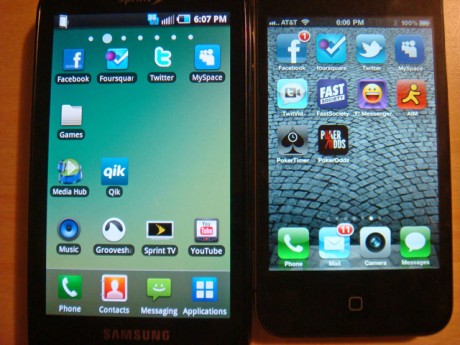 Hardware:
As you can see above, the Epic 4G is about the same size as the iPhone 4 but the screen on the Epic is larger. The Super AMOLED display is large, bright and stands out as soon as you see this unit and is one of it’s big features. Unfortunately, this bright screen eats up a lot of battery power. More on that later.

Below, you can see that the Epic is thicker because of the slide out keyboard. It’s not so thick that you can’t put it in your coat pocket but you probably won’t want to put it in your back pants pocket.

The Epic feels lighter even though the iPhone is 4.8 ounces and the Epic is 5.4 ounces. Maybe the plastic fools you into thinking it’s lighter. I like the curves on the Epic in my hand, which feels more like the old iPhone 3G. Unlike the iPhone 4, which is hard to pick up from a flat surface, the Epic is easy to pick up. 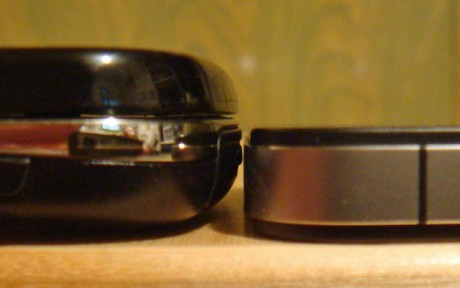 The Epic has both a front and back facing camera with the primary being a 5MP (same as the iPhone 4) with a very bright white LED flash below the lens (see below). You can take pictures using the touch screen or by using the dedicated shutter button on the side. By pressing this button, the “camera” app automatically starts up. I think this is a great feature and makes the unit feel like a camera. You can also record HD video at 720p @ 30fps. More on the camera in the next installment of the review. 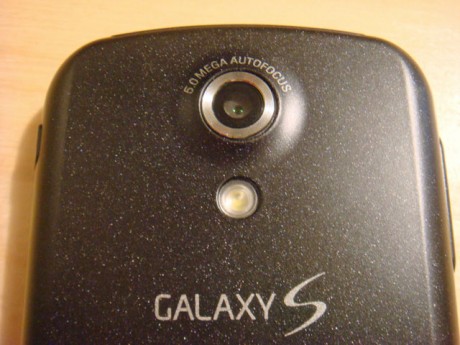 While we’re looking at the back of this unit, the back has some type of soft touch backing to keep it from sliding around when you put it on a slick surface. I like this feature because when I put my iPhone 4 on my laptop, it slides off and falls to the floor, whereas this backing keeps the Epic in place.

The Epic also has a tiny red LED in the upper right front, next to the Sprint logo. This LED will flash when you’ve missed a call or text message. This is a feature on the Palm Pre that I missed a lot on the iPhone. The LED is a little small to notice from far away, but it’s better than having to turn on your iPhone every time you need to check to see if you missed a message.

The USB jack at the top seemed very odd at first but I eventually got used to it. If you have your Epic connected to your computer located further than your phone, the cable goes straight back without having to go from the bottom, then up to the computer. If you get the docking station for the Epic, all that becomes mute. There will be a separate review on the docking station.

The speaker is on the back (at an angle) at the bottom and sometimes can become muffled if you have your phone on a soft surface like your couch. The iPhone’s speaker is located on the bottom (not the back) so it points towards the user, and avoids this situation.

Below the screen, there is a Android function area with 4 touch buttons: Menu, Home, Back and Search. Apparently, Google allows each manufacturer to order these buttons anyway they want so it’s different on many Android devices. Maybe good for the manufacturer if you want to be different, but no so much for the user switching from one to another.

Since you cannot self configure the location of these function buttons, I would have preferred them to be real buttons. However, I did eventually get used to the touch buttons and you can configure it to stay lit in the setup so that it doesn’t go dark too fast. 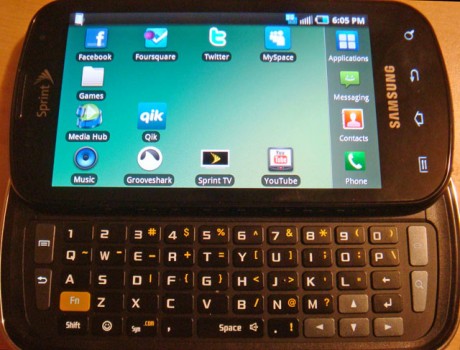 Of course, the big feature for me with the Epic is the slide-out keyboard. Because it’s a landscape keyboard, it’s luxuriously large, and even includes the top 5th row with numbers. A lot of other keyboards do not include that top row and it’s really nice not to have to press any function keys to get the numbers. There are also dedicated buttons for the 4 main functions (menu, back, home and search). However, the click distance feels a little shallow and sometimes I cannot tell if I’ve pressed the key or not.

Also, although the slide-out keyboard feels okay when it’s open, when it’s closed, feels a little loosey goosey and cheap. I like my gadgets to feel tight and precise, but I’m being picky here.

The actual hardware specs for the Epic is an impressive 1GHz Cortex A8 Hummingbird, so it is very snappy and never feels sluggish like my old Palm Pre. Like the iPhone and Palm Pre, there is no HDMI output, but it does come with a 16G SD card standard out of the box.  So unlike the iPhone, if 16G is not enough, you can always buy more space. 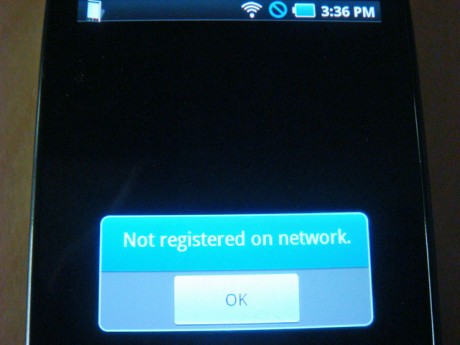 For some strange reason, something weird happened to my Epic after about a week and I was not able to connect to the Sprint network. After a quick call to customer support, they were able to quickly remedy the situation. So far, this has not happened again.

As for battery life, out of the box without tweaking the software, I got less than a full day (8 hours) with moderate use. With very light use (no calls, some texting, browsing), I can get through an 8 hour shift. The battery that comes with the unit is 1500 mAh but you can get one that is 1600 mAh from Seidio for $50. They also have one that’s 3300 mAh but it comes with a fatter back cover and makes your phone bigger.

In the Android 2.1 version which came with the Epic, there’s some problems when the battery level becomes extremely low. Sometimes it will become confused and also will not let you launch the camera app. It took me a while to figure out what was going on and at first, I thought it was a hardware problem. I’ve read that this will be fixed in the 2.2 Froyo version which should be coming out this week.

Just by lowering the brightness of your display, you can get a lot more juice from you battery. You can also turn off 4G and bluetooth to save a little power also. This is easy to do on the Epic.You can swipe the very top of the screen downward and you will get a selection of all the network related buttons to turn off or on.  There are other tricks you can do in software which will be in a future article.

I didn’t do a scientific comparison but the battery on the iPhone 4 seems to last longer with the same amount of use. But you can swap out the dead battery on the Epic if you have spare batteries like I do. This can save your life in emergencies. 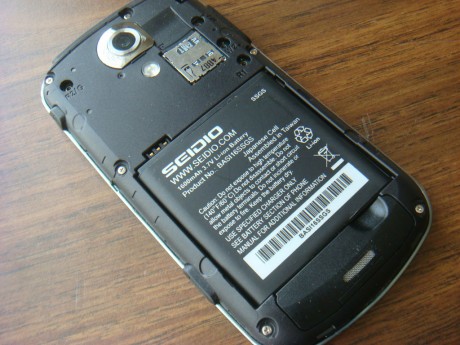 Sprint 4G:
Although I didn’t get this phone for the 4G, that’s one of it’s big features so I checked it out in detail.

During my testing, I found the 4G coverage to be very spotty at best. Check with Sprint because 4G is not available everywhere yet. Sometimes, I could not even get 4G in many parts of Los Angeles. What’ strange is, when the 4G is slow, it still uses it even if the speed is slower than the 3G. So if you turn off 4G, it will switch down to 3G and you will get faster service. Not very smart.

In my testing, I found using 4G on the Epic itself to be anywhere from 3.27 Mbps to 6.13 Mbps (downtown Los Angeles) depending on location. However, sometimes it can be as slow as 0.07 Mbps when there’s something wrong with the connection.

Using the hotspot app, I measured the 4G speed on my laptop connected via my Epic with the following results.

So basically, the 4G is just slightly faster than the AT&T DSL in downtown Los Angeles. I also did the same test while I was in Honolulu with the following results.

According to Sprint, the new Android 2.2 Froyo should fix some problems with the hotspot app, which I’m guessing will automatically switch over to 3G if the 4G connection is bad. This new version should be out shortly.

So I was not very impressed with the 4G service I’m getting on Sprint in Los Angeles. I’m not doing anything that requires a lot of speed but for people that want to use the hotspot with multiple laptops, you’d better find a really good spot with perfect 4G connection or you won’t even be able to browse any websites.

Conclusion:
Compared to the Palm Pre, it’s big but not compared to the iPhone 4. There are some minor problems with button locations on the Epic but nothing that’s a deal killer. The battery life seems to be shorter than my iPhone 4 but I’ve figured out ways to get around it. The Epic is as snappy as the iPhone 4 and makes running apps fun.

The 4G is a bust but the iPhone 4 doesn’t even have it.

All in all, I’m happy with my Epic and am using it instead of my Palm Pre and iPhone 4.