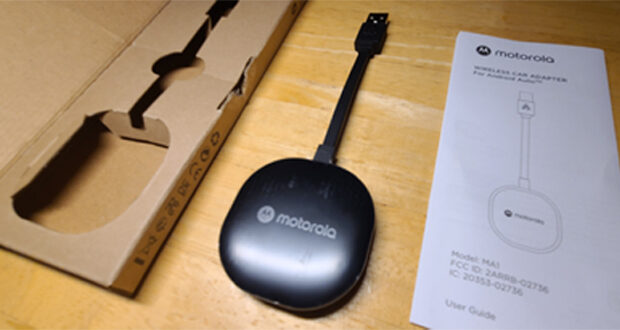 For years, I’ve been using a cable to connect my Samsung smartphone to my Android Auto in my car. It is a big annoyance especially when you are carrying items into the car. Although the bluetooth does connect wirelessly, I need the USB cable to see the map and other apps on the car screen.

Here comes the new Motorola MA1. It’s a wireless gadget that plugs into the USB cable that goes to your Android Car and connects wirelessly via bluetooth automatically.

First off, let me explain what I have installed in my car. A few years ago, I got the Kenwood DMX7706S so that I can have a backup camera and Android Auto. However, let me let you know that I don’t recommend this monitor because of its sluggishness and terrible touch screen. That has nothing to do with the Motorola MA1, but I wanted you to know what I’m using.

You can see how Google Maps looks like on the screen below. You can setup Android Auto to read you new text messages or hide them in case you have a passenger that you don’t want to reveal notifications to. After maps, listening to music is probably what most people use it for. Generally, I use it to listen to podcasts while driving.

One important thing I noticed is, when I had my phone connected by wire to my car, I was able to put my phone between my front seats. But wirelessly, the GPS does not work in that position and I have to put my phone on my dash for consistent GPS connection.

After trying different positions, I’ve come to the realization that the USB cable must have acted as an antenna for the GPS. There is no other reasonable explanation. Since I’ve had this for a few weeks, I’ve gotten used to putting my phone on my dash and everything works pretty well. The phone will connect in a few seconds and by the time I am out of my garage, Android Auto has launched on my monitor.

One other thing that I didn’t consider was battery life. When I was connected by wire, the battery was constantly being charged so I could drive for hours without worrying about the battery. However, now that I’m wireless, the battery starts to drain and after about an hour and a half, I have to plug it in. This might be a big consideration for people with long commutes.

All in all, the Motorola MA1 does exactly as advertised and I am very happy with it.