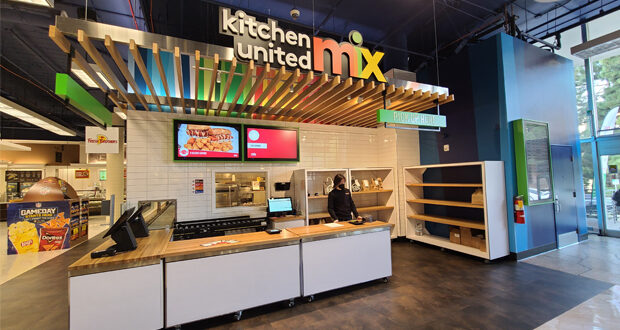 During the start of the pandemic, Ralphs in Westwood got rid of the self serve salad bar, as well as other self serve food. Although I understand the reasoning, I was very sad to see it go. For a while, that area was left empty until now. Kitchen United has opened their ghost kitchen inside Ralphs so you can order your food and pick up at the end of your grocery shopping.

Although you can actually put your order in when you get there, like at a fast food restaurant, I decided to download their app and order on it. There are 10, yes 10, ghost restaurants offered at this Ralphs. It was a little overwhelming so I just decided to pick the first one, which was “bushi,” a Japanese ramen place.

Normally, I would never order ramen to-go, because there is no way this can be good. But I decided to commit to my method and ordered their “Special Combo” which allows you to pick 3 things. My order was as follows:

The middle picture above shows the large display that shows when your order is ready. It felt a little like I was at the race track. Yes, I’m a degenerate. Later, when I got home, I decided to go to the Kitchen United website and got the error shown on the right above. To be fair, I think olo.com (NYSE: OLO) is the company that provides the backend software so let’s agree to blame them.

Now, in case you wanted to see how they prepare your food, there are windows that show each of the ghost kitchens (see below). It seems a little inefficient to split them up but maybe each ghost kitchen is operated by a different company. Also, having so many walls would make it a little lonely. But it was very slow and all of the employees were in one of the ghost kitchens socializing.

Now here is where the rubber meets the road. When your order is ready, the app will text you to let you know. But when I came to pick up my order, it only had one item in it. Luckily, I checked before I left and went back and they quickly fixed the situation. I’ll chalk that up to new staff being trained. Or lack thereof.

As you can see below, the ramen comes in 2 separate bowls, with the soup in one and everything else in the other. On a side note, the egg was shown in the app as a $2 upgrade but they gave it to me free. Normally, I would think that was because they originally screwed up my order, but in this case, I think it was because of the new employees not knowing about the egg. See how the lack of training taketh, then giveth? So it evens out.

As suspected, taking ramen home was not a good idea. In fact, it was a horrible idea. I will never do that again. To be nice, the egg was good.

The chicken karaage was much better. If you already like karaage, you will like it. I really don’t know if the ponzu was supposed to be used for the karaage but it was delicious regardless. I recommend both.

The salmon roll comes wrapped in a way where the nori is separated from the rest of the sushi roll. You have to basically roll it yourself but it’s easy to do, and that means the nori is very crisp. The way it should be. Although, I do feel like it’s a little on the expensive side, considering if you order the 6 roll set at Kazunori, it’s $27 (27 / 6 = $4.50 each). But at least it was good and Kazunori doesn’t have handrolls to go, so there’s that.

All in all, I think the Westwood location is a little before being ready for prime time. However, I feel like this has potential, especially being across the street from UCLA. I would order the karaage and salmon roll again, but next time, I’m going to try one of the other ghost kitchens. In fact, I might try all 10. We’ll see.

[Update 1/17/2022 – Monday]
After the semi-misfire a few days ago, I decided to give it another try. This time, I ordered the Dog Haus sliced sausage with brown mustard, which was good but the slices did not go through and the sausage was connected on one side. To go with that, I ordered an Impossible slider, which was not good. Normally, I would give them the benefit of the doubt but it was completely bland. And finally, I ordered a side of chili which was terrible. Thank goodness I re-ordered the salmon avocado roll and that was still good like last time. I’ll order the sausage again but nothing else from this episode.

By the way, when I went to pick up my order, the status on the large display said my order was “Sorting…” so I decided to shop at Ralphs. When I returned, it still had the same status and it turned out my order was actually ready the whole time. This place is definitely not ready for prime time.

[Update 3/1/2022]
After 2 disappointing tries, of course, I decided to try again. This time, I ordered their Weekday Lunch Combo for $12.

The pizza was acceptable and the salad was good. For $12, it’s not a bad deal. So far, this is about the only thing there that I liked.