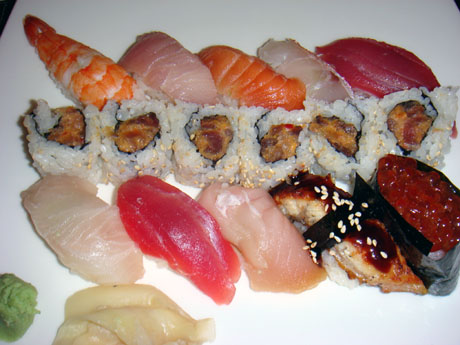 Yuzando is located in the West LA Tokyo Row area on Sawtelle in the same building as the Shabu-Shabu place.  It used to be another sushi place and I guess it has changed owners and there’s a new temporary sign hanging on the building.  That’s always a bad sign when the owners don’t want to spend the bucks for a “real” sign.

The inside of this place looks almost the same as before but it’s been brightened and spruced up a little. The lighting on the wall next to the tables are way too bright and hurt my eyes.  But everything looks clean and updated.  So far, so good.

Other bloggers seem to like this place so I was looking forward to some great sushi.  My friend ordered her usual seaweed salad and although it looked small, she said it was good.  We both ordered the mixed sushi, mine for what was supposed to be under $20 on the menu, but came out $23.50 on the bill, and hers for $19.50.

The picture above is what was supposed to be the best mixed sushi on the menu.  No, it’s not a picture of something from Ralphs.  You can see from the unagi and even tuna, that this is not what it should look like.   For a comparison, see the picture from my Izayoi mixed sushi plate.  When sushi looks bad, it follows that it tastes bad.  The bait and switch on the pricing was bad enough, not to mention the small sized sushi, but I just don’t like bad sushi.  Period.

The only good news is the hot green tea was free.  Unfortunately, it comes in the smallest tea cup ever invented.  If you’re going to offer tea that small, you need an ultra attentive waitress to refill it every 5 minutes.  Unfortunately, no such luck here.  Stay away from this place.  I’m sure it’s not going to last very long anyway.  At least the owner saved money on the sign outside.

Previous: U-Scan, or Can You?
Next: Let’s Eat Here!