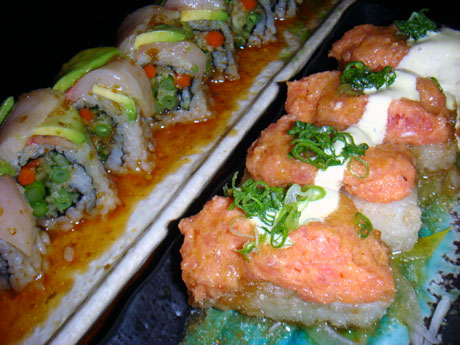 Tengu in Westwood kind of reminds me of hip sushi places that they feature in a lot of movies.  It’s got the darker ambiance, good for a romantic dinner or drinks.  There’s no parking lot (hey, it’s Westwood) so just valet your car in front.

At the front desk, there are always hot female hostesses that look like they’re from “The Devil Wears Prada” talking on the phone.  They were probably laughing at my outfit after they seated me.  Or not.

There is a sushi bar with a couple of what appears to be real Japanese sushi chefs.  On this trip, my friend and I sat at a table and ordered rolls.  First up, some appitizer. 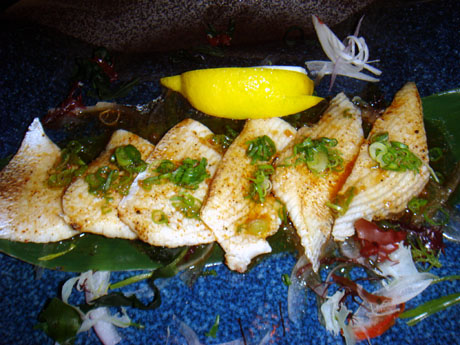 This seared Yellowtail was more fully cooked than seared but “Yaki” means cooked in Japanese, so I guess that’s the way it’s supposed to be.  It was good, especially with the ponzu sauce.  Nice start.  On to the rolls.

This place has some really unique rolls.  The Naminori seems like a great choice for vegans and again, the ponzu sauce really made this tasty.  The Tuna A La Tostada is made with crispy rice (like tempura?) and I didn’t care for it all that much.  It was too heavy for my taste. 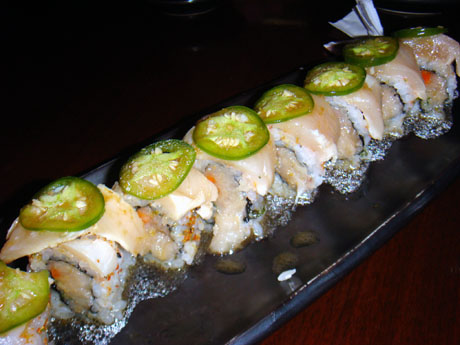 My friend ordered the Diablo which sounded too spicy to me.  He tried one and he said it wasn’t crazy spicy so I tried a couple and it was a little spicy but not as spicy as you’d think with the name.  However, later, my friend did come upon a piece that was super spicy.  He said maybe it was a seed in the jalapeno.

For scientific comparison, I also ordered the Salmon nigiri ($6), and Unagi nigiri ($7).  A little pricy but very fresh and prepared perfectly.

All in all, this is a great place to try some strange rolled sushi but be prepared to pay a premium for being in Westwood.  Service was good, and the sushi was fresh.  If you’re a hip movie industry lawyer trying to impress your date, this is the perfect place. 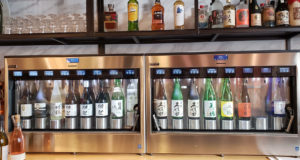 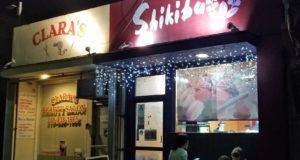