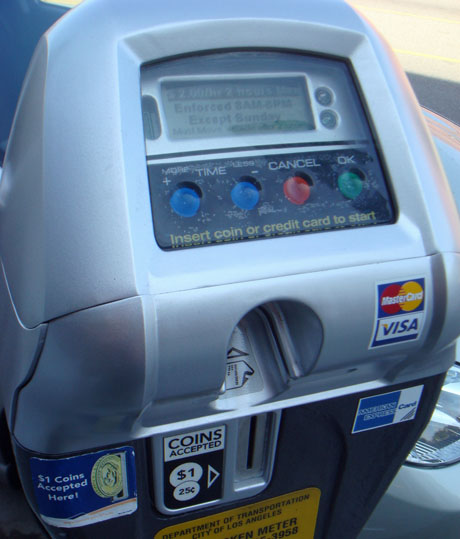 There are new high tech parking meters in downtown Los Angeles that take credit and debit cards. You simply slide and pull out your credit card, just like at the gas station, then use the blue “+” and “-” buttons to add or subtract time to enter into the meter. Of course, you can still use coins.

There are green and red LEDs on the opposite side for the meter-maids to see when they drive by. On the user side, there’s an LCD and 4 buttons to control usage. The unit gets power from a solar panel on the opposite side, but I’m not sure it’s not getting some power from the grid also. Somehow, the meter checks your credit card and authorizes or rejects your card. I’m not sure how it’s doing this but it’s pretty fast. Not sure if they have WiFi or underground wires.

So far, I haven’t tried using a bad card but I assume it’s really doing the check. One thing I don’t like is, when you put your credit card in, the amount defaults to the maximum ($2) and allows you to reduce the amount using the minus button. However, it will time out automatically and charge the maximum if you do nothing. This is a problem if there’s something wrong with the buttons and you cannot enter anything. In that case, you will be charged the maximum automatically. I guess with LA’s budget crisis, they have to do everything they can to make a few extra bucks.

Be sure not to use your credit or debit card if you’re going to commit a crime. They’ll be able to trace you down to your exact location from your card.

Update 6/14/2010:
I just found out that the balance on the debit card that I was using at the meter was zero but the parking meter accepted it. Either the “Authorizing…” message is fake or I’m going to get a letter from the city.