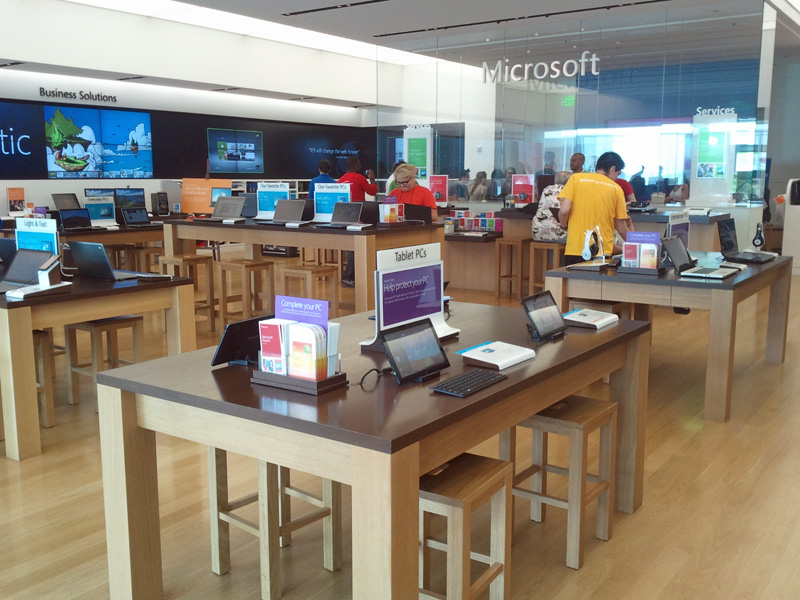 They even have an “Answer Desk”, just like Apple where you can ask your questions to a genius guy behind the bar. They were also showing the new Lenovo touch screen computer (shown at CES 2012) running Windows 8 in touch screen mode. Frankly, unlike my iPad, I don’t want to touch the screen on my desktop computer. If it worked like “Minority Report” where you used Kinect to make hand and arm motions, I’d be on board.

The only important thing I learned was that Windows 8 has a non-touch screen desktop mode which looks and pretty much acts like Windows 7. I thought I was going to be stuck on Windows 7 but this looks workable for me. Whereas Apple has a desktop OS and a separate mobile iOS (for iPhone and iPad), Microsoft has decided to merge both desktop and mobile OSes together into one. From a technical point of view, it’s easier to have one version than maintaining 2 separate OS versions. Only time will tell if this was a good move or not.

If you are a Windows user and have some questions about where Windows 8 is going, the people working at this store actually know what they are talking about and can give you a demo. So no more frustrating conversations with the untrained Best Buy zombies for me.