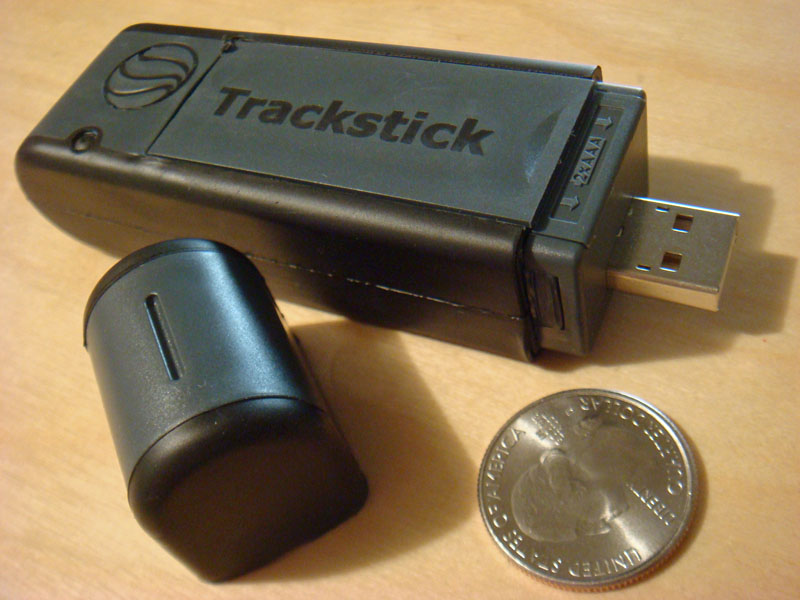 A friend of mine wanted to find out exactly where her ex-husband was taking her daughter while in his custody. At first, I looked into the real-time GPS tracking devices that prevents child abductions but they were expensive, large, and most required a monthly fee. This application didn’t require real-time tracking because all she wanted to know was where they were after the fact.

So, after doing some more research, I came upon this vehicle tracking system called Trackstick, which would record the exact location of the vehicle, traveling speed, along with the time, and even other extra stuff like altitude and temperature. 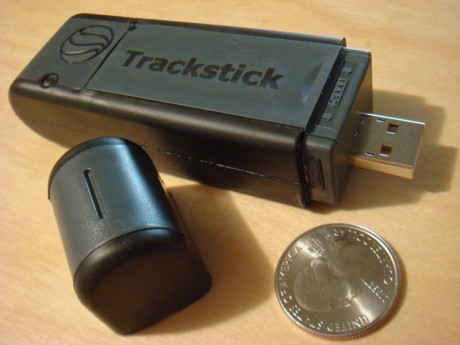 Trackstick has several models but the one I picked is slightly larger called the Super Strackstick ($229 from Brick House Security) which has more memory (4MB) and a power saving mode that allows the battery to last as long as 8 weeks (2 AAA batteries). The picture above shows the Trackstick and it’s cap that covers the USB connector and a quarter. As you can see from the picture above, it is pretty small but not as small as I thought from the picture. The actual dimensions are 4½” x 1¼” x ¾”. 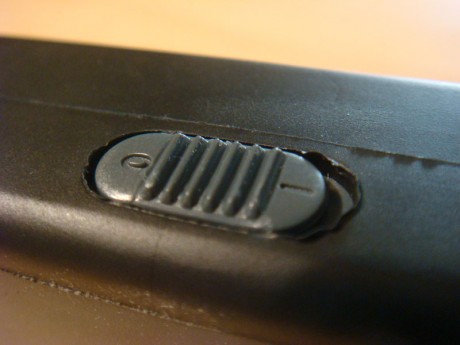 The power switch is on the side, and as you can see from the picture above, there are some manufacturing defects on the plastic but nothing that prevents the unit from working properly. I guess “American Made” doesn’t mean what it used to. Or maybe it means exactly what it used to. 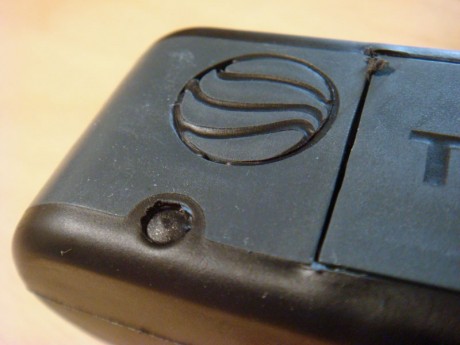 A close-up of the top shows the LED which will be red at first, then turn green when the unit has initialized itself with the GPS system. This process can take up to 15 minutes according to the manual and from my tests, confirms that it does take a few minutes. This could be a problem in some applications where the trips are quick and short.

At first, it seemed like the LED was too small and hard to see. However, upon second thought, I realized that this might be on purpose in case this devices is being used covertly and you may not want the target to notice the LED. Then on 3rd thought, if that was the case, there should be an option to turn off the LED completely. 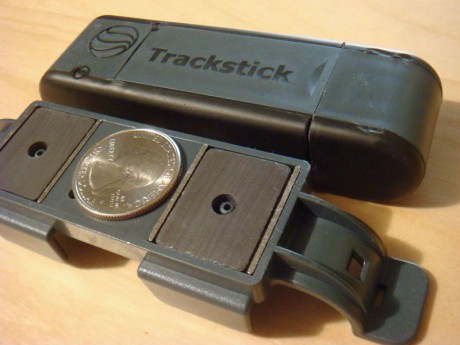 The package also comes with a magnetic mount (shown here with a quarter for size) which could be used to covertly mount the Trackstick onto a vehicle. The magnet is very strong and would not fall off a flat metal surface. More on that later.

The unit does not come with any instructions in the box. Everything is available online on their website, which is the way of the future. First, you can download the instructions in PDF format, then the Trackstick Manager application shown below. This application allows you to change the settings of the unit, look at the battery power, and of course, download the GPS tracking data onto your computer for examination.

There is only a Windows version of the application. So if you have an Apple OS, you will not be able to use Trackstick on your computer. That’s obviously a deal breaker for some people, but not for me. 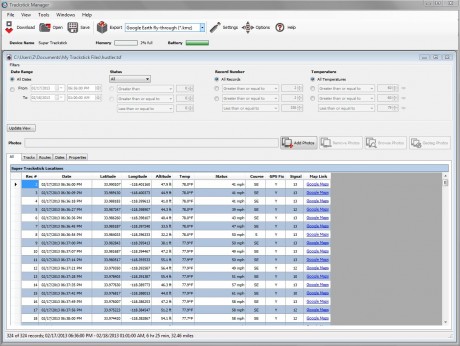 One thing that is peculiar is the Trackstick must be turned on when being plugged into your computer. Why the computer can’t power it is probably some design compromise they made to save some parts, I assume. It’s a little annoying especially if the batteries are dead because you have to put new ones in before you can download the data.

On my first test, I followed the instructions to the letter and placed the Trackstick on my dashboard so that there was a clear line of site to the GPS satellites. After driving around, I went to the Hustler Casino, parked, played poker, then returned home. The Trackstick Manager has a way to save the data so that you can view the entire trip on Google Earth. 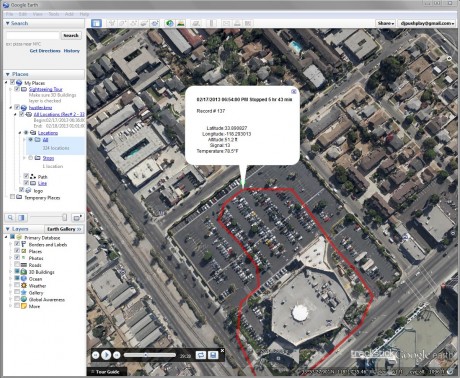 Not only does Google Earth show you the path, you can even play back the trip like a video. The screen shot above shows the exact location where I parked my car, and even the amount of time that I was parked there down to the minute. The location shown is accurate to without about a car length (using default sensitivity), which is good enough for any application that I can think of.

On my second trip, I put the Trackstick inside a box, then put the box inside a bag made of fabric and placed it on the back seat of the car. Everything worked just like before when I had the Trackstick on the dashboard.

On my last test, I used the mount to put the Trackstick on the side of the engine area under the hood where it would not be found. Even with that much metal blocking the signal, I was able to get 4 more days worth of data (after the first 2 tests) before the battery died out. The accuracy did go down a tad compared to having it out in the open to about 2-3 car length instead of one.

According to the manual, you can also geotag your photos for social media websites. That’s not why I got this so I didn’t try this feature.

All in all, the Trackstick did everything as advertised with no glitches or problems. It was simple to setup and connect to the application on my computer. So if you need to see how fast your teenager is driving, or see where your husband is really going on boys night out, Trackstick will do the trick. It’s not cheap, but it works.