Last time, I just installed Wallet on my Samsung Galaxy S4 but didn’t actually use it. This time, I went to my local Pinkberry because I already knew from about a year ago that they accept Google Wallet.

As advertised, I put my phone up against the NFC reader, and the clerk punched up the purchase on the register, and beep… beep… then I got this on my phone: 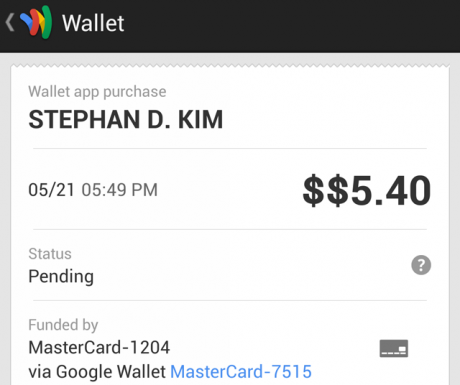 There are 2 things that are a little strange. First, instead of “Pinkberry,” I seem to have purchased my yogurt from Stephan D. Kim. The second oddity is a bug in the app that shows two “$” in front of my 5.40 purchase. I guess the Wallet app is trying to tell me that Pinkberry is very expensive. The next day, I got an email from Google telling me that the purchase at “Pinkberry” was completed.

Clearly, Wallet is not ready for prime time and I doubt a lot of people are using it since I found weird stuff on my very first purchase.

Google also just announced that you will be able to use Google Wallet to send money via Google Mail and will be slowly rolling this out to 18+ users of Gmail. Great. Yet another way to send money online. That’s just great.

Updated 6/4/2013:
Although the email I received said “Pinkberry” on it, my actual credit card statement still shows GoogNFC, followed by “Stephan D Kim” on it. Weird.

Update 6/11/2013:
When I used it at CVS, I did have to enter my PIN and all my receipts showed CVS. I think when I went to Pinkberry, I might have had the app already open so I didn’t have to re-enter the PIN but I’m not sure.