As you may know by now, I’m really into security and WiFi connected devices. So when I saw the Lockitron back in 2013, I couldn’t wait to get it. Unfortunately, there was a delay in this Kickstarter project,  they announced that they would start shipping in July 2013, So by August, I had pretty much given up on getting it. Finally in late August 2014, I received my long awaited Lockitron in the mail.

As you can see below, the elegant looking package comes with (left to right) the faceplate, the guts with included AA batteries, screwdriver, rubber insert, and C-plate. Yes, they include a screwdriver, just like some Ikea furniture.

First, download the Android app or iOS app to setup your lock. When you launch the app, the first thing you will see is the video below. It explains what parts you need from the box, how to setup your WiFi, and finally the actual installation of the device over your lock. The most interesting part is that they used the “light” from your smartphone screen to program the WiFi settings. I’ve never seen this method used before. Usually, it’s done via Bluetooth. One thing that you have to remember is to make sure the smartphone screen does not time out and turn off. I had to touch my screen a couple of times to make sure of that.

Once you follow all the directions in the video, your installation is complete. Here’s what it looks like installed on my door (see below). As you can see, it is fairly large and thick. In fact, it’s so thick, it makes it difficult for me to turn the top deadbolt located above the Lockitron. 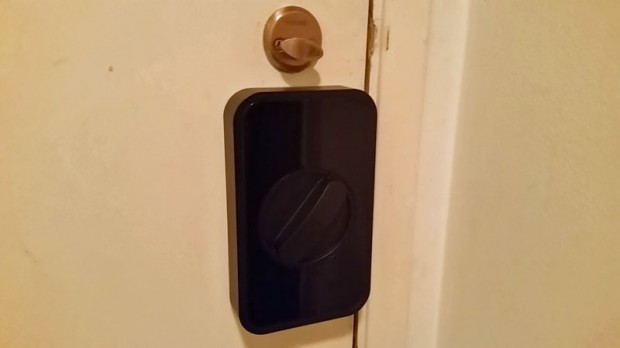 As you can see, the green LEDs indicate that your Locktron is properly connected to your WiFi.

The Android version of the app is shown below. The left screen shows the main screen which allows you to pick from different locks that you control. When you swipe right, you can unlock the specified lock. Swipe left to lock. The middle screen shows the activity and status of the lock. It shows who locked or unlocked the Lockitron and when. However, the Android version does not show when the lock was used manually. The iOS version does properly show that statistic so I assume they will be fixing this bug in a later version.

The right screen shows the Settings screen which specifies which way your lock turns, the name you gave to your lock, the address and time zone. You can also program a NFC sticker so that when you put your phone up to it, it will make your phone open the lock. However, I was never able to get the programming of the sticker to work. The Locktron support people tried to help without success. 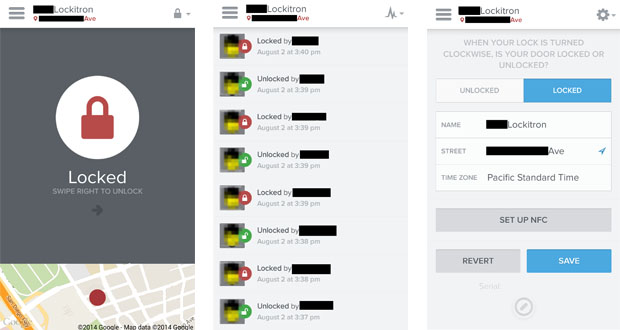 The Lockitron website says that the battery should last 6 months. So far, I have only used it for a little over a month so I can’t verify that usage length. If your guest does not have a smartphone, there is a way to text message them but this feature will cost you $5 per month. No thanks.

If what you want is a quick way to get in without using your key, Lockitron is not what you should get. But if you need to allow other people to enter when you are not there, without having to give them copies of your keys, this is exactly what this is for. You can also use it to make sure to lock the deadbolt after people leave.

One other thing to note here. To save battery power, the Lockitron will go to sleep and will not respond immediately to your WiFi commands. However, you can knock on the door to wake up the unit. This feature does work, although it can be a little annoying at first.

All in all, if you don’t want to change your deadbolt, and need to control it over the Internet, this might be a good solution for you. It’s not sexy and might not be made to withstand heavy usage in a work environment, but should be more than enough for a home situation. Let your in-laws, friends and relatives come and go without having to give them a set of keys.

Update October 22, 2014:
The batteries that came with the unit died after approximately 2 months. I’m hoping that some higher quality batteries will last longer. I’ll report back here when those die.

Update January 7, 2015:
Although I am updating this in January, the batteries didn’t make it that long. This time, the batteries lasted about 6 or 7 weeks. Therefore, until this is fixed, I cannot recommend this product.

Lockitron Keyless Door Entry Review
As you may know by now, I'm really into security and WiFi connected devices. So when I saw the Lockitron back in 2013, I couldn't wait to get it. Unfortunately, there was a delay in this Kickstarter project,  they announced that they would start shipping in July 2013, So by August, I had pretty much given up on getting it. Finally in late August 2014, I received my long awaited Lockitron in the mail. By I digress. As you can see below, the elegant looking package comes with (left to right) the faceplate, the guts with included AA batteries, screwdriver, rubber insert,&hellip;

Summary : Setup is surprisingly easy and fast. It's not for everyone but if you need a way to control a deadbolt via Internet, and don't want to change your deadbolt, this is a good solution.