Home > Shopping > AT&T Store of the Future Opens in Westwood 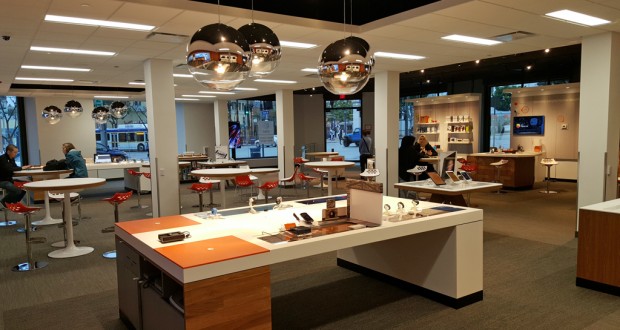 AT&T Store of the Future Opens in Westwood

For about a year now, AT&T has been opening very large retail outlets called “Store of the Future.” They have now opened one of these in Westwood near UCLA. Apparently, this is AT&T’s idea of competing with Verizon and has the same feel as the Apple, Microsoft, and Samsung retail stores.

Not only can you pay your AT&T bill here, you can also play with a lot of hardware, and not just smartphones. AT&T is pushing 3 main areas: DirecTV, Connected Home and Sound Systems.

The first one on the list is a no-brainer. After their recent purchase of DirecTV, it’s time to really push it with actual live DirecTV boxes to play with. I have to admit, their UI and software has improved over the years and is light years ahead of the horrible UI on the Motorola boxes that Time Warner Cable provides.

The Connected Home is also in direct competition with Time Warner Cable’s system. AT&T doesn’t seem to have it all integrated but they are demonstrating live video at these stores so you can try it out. This area of the market is very hot, as evidenced at CES so it’s natural that AT&T wants to be in this space.

The “Sound” area they are pushing is a little strange to me. They have this area full of bluetooth connected speakers and headsets. I can only think that this was their idea of catering to younger shoppers. You can try out each speaker to see how they sound, which is a great feature since they don’t have demos at Best Buy, or most other stores. But will this section bring in the younger crowd to AT&T? I’m not convinced.

If the Apple formula works for Apple, why not try it? I guess that’s what they said at the meeting somewhere in AT&T corporate. What I do know is the location they picked in Westwood used to be the Nike store many years ago. It didn’t work for Nike. We’ll see if it works for AT&T.