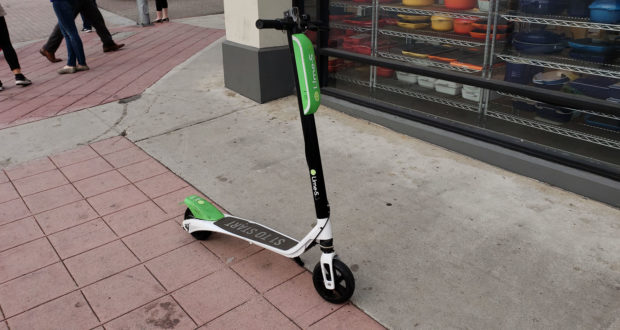 It appears the war of the scooters is still going on as Bird is kicked out of Santa Monica, which is causing it to flee to Westwood. However, Lime-S is not giving up on Westwood and in fact, is spreading out to all over the city. There happen to be a Lime-S near me in Westwood so I decided to actually give it a try.

The Lime-S app is very similar to Bird and you can see the locations of the scooter. You scan the QR-code and unlock the scooter to start your ride. The first time you use it, you will have to also scan your drivers license and agree to the terms of service. After the ride, you lock it up and walk away.

The only thing that was different was my credit card did not get charged right after my ride, like on Bird. When I re-launched the app, it said that I needed to reload my account with money and that I owed $2.20 from my last ride (see below left). Very strange. It already had my credit card but instead of charging it, it wants me to transfer $10, $20 or $50 into the Lime-S account (see below middle). 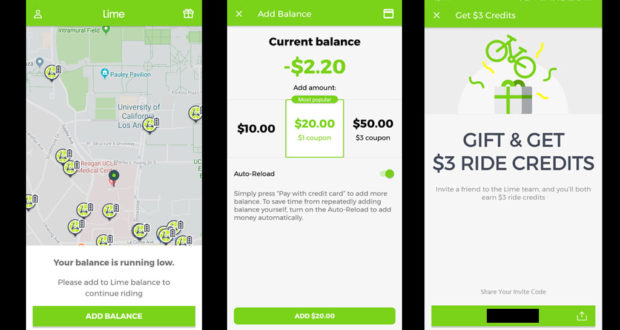 So basically, instead of charging for the ride, they want you to transfer a chunk of money that they will hold for you, until you ride again. It’s sort of like the money in your Paypal account, both of which do not earn any interest. The only problem comes up if I never use the app again and stay owing money to Lime-S. I assume they think more people will have extra money in their account, than people who owe money. Interesting business model, if it works.

You can also get your friends to ride and get $3 for doing their marketing work (see above right). This reminds me of when Paypal first started, when they offered $5 to anyone with an email address who opened an account. Paying people to use your service. Not sure that’s a sustainable business model but if they can get new people to sign-up, it might work.