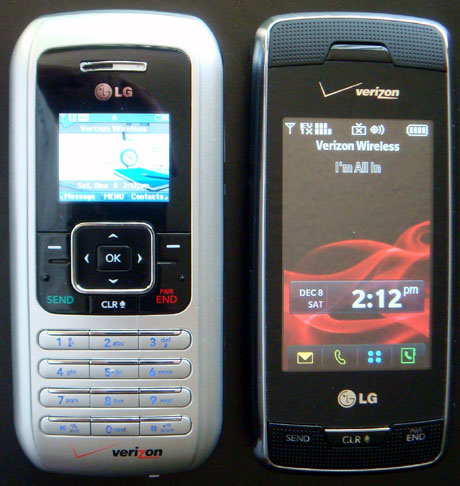 Many blogs have posted what they claim are reviews of the Voyager but I have yet to see a real full review.  I decided to wait until I had time to really checkout this unit before opening my mouth.

Let’s start with getting the unit.  Some have posted that it’s hard to get one but I ordered mine online directly from Verizon the first week that it was available online.  That was on Wednesday morning and had it in my grubby hands on Friday via FedEx.  The only strange thing was that I didn’t get an email confirmation right away like I did before.  It took almost 24 hours to get the email confirmation.  In the mean time, I had called Verizon and they told me everything was okay and just to wait.

After getting the unit, I didn’t bother fully charging the unit and followed the usual instructions on activating a new phone via their website.  My first impressions were negative because I couldn’t get the touch screen to work properly, even after going through the calibration setup.

What I didn’t realize for 5 days was that you have to touch the screen with the very tip of your finger.  I was trying to touch it with a flat finger and this was apparently confusing the hell out the the software, which was giving me false lifts.

To be honest, I almost gave up after the first 2 days.  Because I used my flat finger, the calibration was wrong to begin with so I had a hard time picking anything.  I was never able to drag or scroll the screen at all.  But once I figured out what I was doing wrong, I started using my nail instead and it worked perfectly.

The large picture above shows the difference in the old and new units.  The Voyager has a large 240 x 400 color touch screen.  This picture doesn’t do the screen justice because there was too much ambient lighting, but you have to take my word that the front screen is beautiful.

Click on the thumbnails above to see a larger version of the picture.  These pictures are side by side comparisons of the Env vs. Voyager.  You can see the keyboard is basically the same except they removed the green and red colors from the “call” and “end” buttons.  Strange.  Amazingly, the Voyager is thinner than the Env.  Otherwise, it’s about the same dimensions and perhaps slightly heavier but it’s barely noticable.

The first picture shows the back where the camera lens is located.  The new camera is higher resolution and they got rid of the weird lens cover which never really worked properly.  Not to mention, the camera lens no longer protrudes and on the Voyager, the back is flat.  However, they also got rid of the flash altogether.  I have to admit, the flash never worked very well before, but not sure about the decision to remove it instead of fixing it.  They did add a “night mode” to try to compensate for it and the higher resolution pictures clearly look better.

The second picture is the calendar in portrait mode.  You can also view it in landscape mode by opening the keyboard.

The 3rd picture is the short-cut menu that you get by touching anywhere on the touch screen.  The one application I wish they had on this list is the notebook because I often like to take notes during poker tournaments.  Instead, you have to drill down a couple of menus to get there.

The first image is a map from the navigator that is pre-loaded with the Voyager.  Although I’ve never used a TomTom or a similar device, this is one of the most useful applications on the Voyager.  The screen is large and if you open the unit, the speakers are loud enough for you to hear the turn by turn directions.  You can also change the voice from the default female voice.

The navigation program is not fool proof and you can confuse it by going in the wrong direction.  Most of the time, it will recover and give new directions, but sometimes it gets so confused that it seems to not be able to located you after you stop.  It’s possible that the GPS communication is lost in some locations.  For the most part, I found this to be a very useful feature.

The second image is a snapshot of this website in the built in browser.  The built in browser is better than the one in the Env but not even comparible to the one on the iPhone.  There’s no finger movements for zooming and even simple scrolling can sometimes be a big pain.  Generally speaking, the touch screen driver is very badly written and often will produce false lifts.  In fact, sometimes you will even get buttons that are still highlighted as if you are touching it, even after you lift your finger.  This is a combination of minor hardware problems and major flaws in the software driver for the touch screen.

The third image is a snapshot of the music player.  Once again, the music player is no where comparable to the iPhone.  However, compared to the Env, it’s much better and actually usuable.  I normally open the unit and type using the keyboard but all functions can be accessed via the touch screen.  Although I haven’t actually tried it, the bluetooth is supposed to work in stereo, unlike the iPhone.

The first of the last set is an episode of “Star Trek” on the Voyager.  Since the screen is very small, the image looks very good.  Since the video streams in digital format, you don’t ever get any analog type problems like snow or tearing.  What you will get is complete loss of image if you are not where you get a strong signal. It’s a good idea to take out the antenna if you’re going to watch shows.  The antenna is very thin and could easily break so you have to be very careful with it.  I wouldn’t suggest watching a show while standing on a train or bus.  One bump on the antenna and it’s likely to get broken off.

The second image is the chanel selection guide.  It tells you one short blurb about the show and you touch the item to see that show.  The only channels available are mobile versions of CBS, FOX, NBC, Comedy channel, ESPN, MTV, Nickalodian, Big Brothers channel and a news channel.  So the selection is not all that great but if you get bored a lot, it can entertain you for a little while.

Now for the nitty gritty.  If you don’t care about the details, skip down to the end of this article.

The good, bad and ugly.

Applications:
The navigation program is very useful. The browser, although not very good, is usuable and I use google mobile to find restaurants, and simply by clicking on the number, it will call the business.  Nice.  There’s the usual calculator, alarm, calendar, and some others.  All seem to work fine.

Hardware:
The screen is bright and good sized for a cell phone.  The main screen shows the date/time in large fonts which can easily be seen from the outside.  This was one of my biggest complaints about the EnV was the text was so small, I had to open the unit to see the time.  No complaints about this beautiful screen.  The unit itself seems fairly solid and I haven’t had any problems.  The keyboard is one of the best features of this phone.  It makes texting and IMing enjoyable and fun, instead of aggravating like on most other cell phones.

Software:
For some reason, there is a limit to how many phone book entries can be in one group.  So for example, if you have a group named “Friends” and you happen to have more friends than the limit (which seems like about 20), you’ll get a stupid error message telling you that you have exceeded your limit.

Yes, you can get around this problem by creating “Friends2” and “Friends3” or “Friends from work” and “Friends with benefits,” but this limitation is rediculous.  What are we back in the days of cell phones with 512 bytes of memory?  There is no reason for this limit in this day and age when cell phones have megabytes of memory.   WTF!!  This should be fixed in the firmware ASAP.

In some applications, when the contact list comes up, sometimes there’s a selection to search by entering letters, and sometimes there are not.  Weird.  Did these programmers ever hear about sharing sub-routines to do the same task?  Horrible.

There are other examples of these inconsistancy problems in this phone but I’ll spare you the gory details.

Sound quality:
For some reason, when the volume is set to high, the sound quality degrades.  Compared to other phones, and even compared to the EnV, this unit has subpar sound quality.  Maybe this is because they tried to make it thinner than the last version.  The internal speaker with the keyboard opened is acceptable.

Battery:
Because of the 2 large screens, the battery life is much shorter than the old EnV unit.  In fact, if you start watching mobile TV, you can almost see the battery bars going down while you watch the shows.

The touch screen:
The touch screen software driver is no where close to the iPhone and long scrolling is almost impossible without false lifts causing it to go into an unintended screen.

Another problem with any touch screen phone is when you are calling an automated system and you are required to punch in a number.  Unlike regular cell phones with buttons, you have to bring the phone away from your head and look on the screen to see where the number buttons are.  That’s after you’ve clicked here and there to just bring up the numeric touch pad itself.  Then, you have to put the phone back to your head to listen for the next instructions, then away from your head again to push.  I HATE IT!

While we’re talking about the touch screen, the phone goes into “locked” mode constantly.  To “unlock” it, you have to touch an icon on the lower left corner.  For some reason, sometimes it’s very hard to unlock the phone, making it very aggravating when you’re in a hurry.