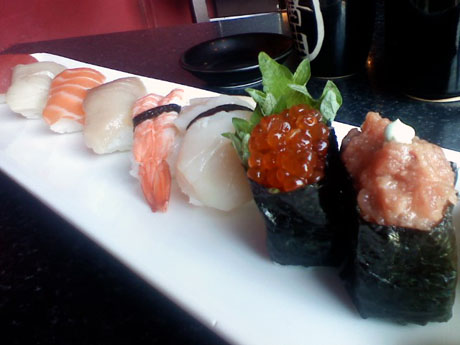 Last time I went to Joy Mart, I tried their Ahi Sashimi, with ponzu sauce, which was pretty good.  This time, I decided to try their nigiri sushi plate ($21.50) since I didn’t have any nigiri sushi last time.

As you can see from the picture above, you don’t get a lot for your money.  That’s okay.  But what’s not okay is the way this was made.  Instead of it being hand made, which is what you would expect from a sushi place, it’s made using those molds that they use for the grocery store sushi packs.  You don’t expect to see that at a sushi restaurant in Little Tokyo.   In all fairness, just remember that this place is mostly for drinking.

By the way, I took this picture with my LG Voyager cell phone instead of my Sony digital camera, so it looks a little blurry.

The sushi was fresh and the spicy tuna (closest in the picture) was really good.  It’s just that I don’t want to pay hand-made prices at a restaurant for what I could get at Ralphs for less money.