After my epic fail with the Archerfish security system, I went looking for something better. One thing that I noticed was that the WiFi connection that Archerfish was using was very unreliable and would go down a lot. So this time, I looked for a wired solution.

What I came up with was the new Logitech Alert Security System. Logitech had an older system which apparently they are slowly killing off to move to this new system.

This new system uses HomePlug network which uses your electrical wiring and makes it a wired network. Basically, you plug the HomePlug box into the power outlet, then plug a cable from this box to your router. Next, you plug the AC power box/HomePlug to the wall where you want your camera to go, and plug a cable from that box to your camera. There are no extra cables for power as the network cable is also used for power.

Each of the HomePlug boxes have a power and active LED lights which can be turned off with a switch on the side. This is a good feature to have because the flashing lights can become very annoying after a little while. 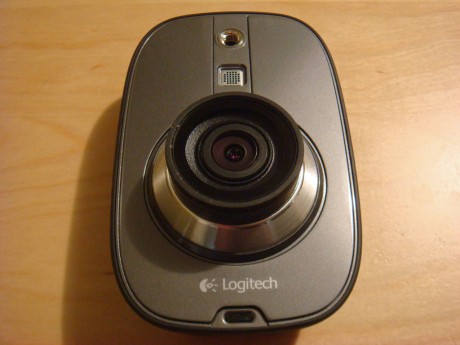 The indoor camera shown above looks more like a webcam than a security camera. There is a microphone, a very wide angle lens and an LED indicator at the bottom. The LED is programmable to be off, on, or blink when motion is detected. If you are using this to see if your nanny is doing something wrong, you might turn off the blinking LED.

The camera comes with a desktop plastic base/holder, mounts that allow you to put it on the wall (like a traditional security camera), and suction cups to stick it to a window. I’ve used both the base and the wall mount with some problems. The base only allows for a small up/down positioning so basically you’re stuck with the angle that it forces upon you. The wall mount also does not allow for all positions depending on how you use the mount. You can force the mount to work but it’s not clear if that’s the way it was designed to be used.

Unlike the Archerfish, installation was fairly easy. After installing the software from CD, I followed the instructions everything worked the first time. The included software is the Alert Commander which allows you to look at live video streaming from the camera. You can have up to 6 cameras, including outdoors cameras with night vision (IR lights) which automatically switches modes as needed. One quick note is that there is a click sound when the IR lights come on and off. This should not be a problem for most people but I wanted to mention it.

This app also allows you to set up to 16 areas for the motion detection and emailing a photo plus SMS messaging alert when motion is detected. This feature is not as sophisticated as the Archerfish which has smarts to detect the difference between cars, people and pets. In the Logitech system, you can set the sensitivity and the area, but it will not know the difference between a car and the delivery guy, or a human (intruder) and your cat.

Each camera comes with a 2Gig microSD card (expandable to 32Gigs) which can store up to about a week of video. When you launch the Commander app, it downloads all the videos from the cameras to the hard drive for backup. Once it’s on your computer, you can view any of the videos which are arranged by date/time as shown above. At this point, you can also save or delete a clip. This is one of the functions that I was not able to get working on the Archerfish.

One big thing to note is that as of this writing, the system only works with PCs. This could be a deal breaker for many people but not for me.

The add on indoor camera costs $230 and outdoor camera costs $280. It’s cheaper for the add-on than the entire system because they only come with the camera side without the computer side. Those prices are not cheap because there’s brains and memory inside each camera and the data is digital, and not analog sent over a network.

Since getting my initial camera, I’ve added one outdoor camera and a second indoor camera. When I moved cameras around, I did have a little problem setting up the new cameras and had to reboot the cameras to get the time to be correct. Also, initially it can take a while for your computer to “find” all the cameras that are connected. Once done, it’s only a few seconds at most.

There is also a smart phone app (for iPhone and Android) that allows you to see live streaming video from anywhere. However, I’ve found that about 50% of the time, at least one of the 3 cameras that I have setup does not connect properly and cannot be viewed.

If you pay monthly, you can also change settings like in the Commander app remotely and watch recorded video (as opposed to live video). So far, I’ve haven’t needed any of these extra features and have not signed up. However, I could see how you  may need to watch recorded video remotely.

For people that want to check on their kids, nannies, or delivery guy, this is a perfect solution. There are no wires to lay in your house but the power line connection is a lot more reliable than the WiFi solutions. However, this may not be the perfect solution for people who are trying to catch burglars in the act if they are familiar with your security system. Of course, any security system can be circumvented with the right knowledge.

As for me, I’ve been very happy with my system so far. I like that fact that I can add cameras without having to do any wiring and getting SMS text messages when motion is detected for free, and being able to watch live video from my phone.

So far, the only small gripes I have are that even after playing with the sensitivity, you do get many more false positives than my old system. However, I prefer this to the opposite of missing something important, which was happening with the Archerfish.

Until I find something better, this will be my system of choice.