As you may know, I’ve been hunting for the best poker eyewear for years. My first one was the Poker Armor brand which I bought back at the 2010 WSOP. Next, I tried the Blue Shark Optics, which I really liked. Then I lost those, so I tried a bifocal version from Blue Shark, which wasn’t as good.

In my continuing search, I bought the “Sleek” style from Royal Eyewear for $115.95. As you can see below, they do look somewhat sleek. Unfortunately, compared to the Blue Shark eyewear, the reflection is very weak and you are able to see the eyes, albeit only if you get really close. From across the table, you can see if they eyes are open but it would be difficult to see exactly where you are looking.

Royal Poker is located in England so they use their postal service instead of UPS or FedEx. When I didn’t get my shipment after 2 weeks, I complained and I did eventually get it after 3 weeks or so. They stated that their spam filter lost my complaint email. Not sure if that was just an excuse or a real problem but they were nice about it. To this day, I don’t know if the eyewear was lost in the mail and they sent another one, or if the first one took that long to be delivered.

Here’s a close-up of the temples show the material which does grip enough to prevent the glasses from falling down when you look down at your cards. 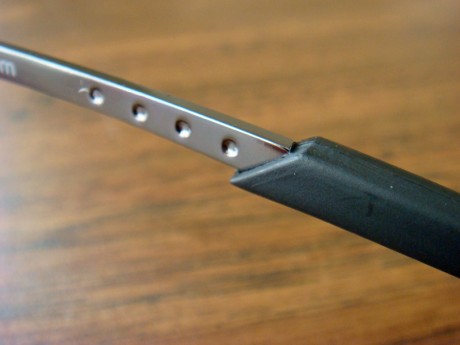 The glasses comes with this carrying case to prevent them from being accidentally crushed. It also comes with a soft cloth bag and a cleaning cloth. 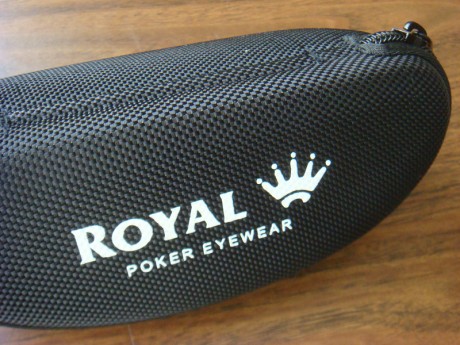 I field tested these new ones out at the Hustler tournament with mixed results. Unfortunately, these glasses have the exact same problem as my new Blue Shark glasses. When light hits them from above, you will get a tiny bit of annoying glare. It’s not nearly as bad as the Blue Shark, but you do get a bit of it. If you wear a baseball cap, or have your hoodie hood up, it will block the lights from above, preventing this problem. However, I don’t. So for me, this is a small problem. Frankly, other players being able to see my eyes is probably more of a problem than the glare.

I wish Blue Shark still have the John Pham model that worked so well. Why can’t these companies just make something that works.

All in all, you get a little less glare and less reflectivity than the Blue Shark brand eyewear but a few bucks cheaper. However, they have fewer models to choose from, and they are mailed from England, so it takes longer.