Unlike my trip back in 2007 to the WSOP, there was no “Gaming Life Expo” this year. I guess it didn’t work out for the booths.

In any case, since the glasses I bought back then were destroyed during my trip to Vegas, I had to get new ones. The WSOP store were selling the Poker Armor glasses for about $60 but with a 10% discount with the Harrah’s players card. These glasses have less coating on the bottom so it’s almost clear when you are looking down at your cards.

Just like in 2007, I had to make a big decision with a medium pocket pair (10s) hoping they had AK, but turned out to be KK in one case, and QQ in another case. Both of these decisions turned out to be my downfall because I didn’t have enough chips to work with after these bad calls. I have to learn to know when to let these hands go. 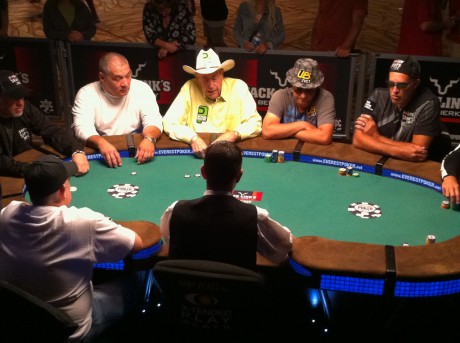 Right after dinner break on day 2, an active player raised, got flat called by the guy next to him, and I decided to put what is called a squeeze play on them with 10-7 suited. The active player quickly folded, but the flat caller went into the tank. After a long time, he called with K-10, which was bad since I didn’t have 2 live cards. Nothing came and I was out of the tournament with a whimper.

Although I didn’t cash like my last outing in 2007, I felt a lot more confident and relaxed. I never felt nervous like the last time, and I felt like I knew what was going on at the table at all times. What a difference 3 years and winning a couple of tournaments make. I really want to go back in 2011, and will probably do more than just one event.

Previous: How to Export Contacts From Your Sprint Palm Pre
Next: Samsung 40′ LCD HDTV