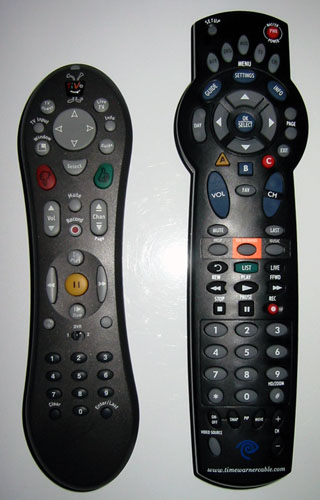 Let’s get ready to rrrumble!

In this corner, the disputed champion of DVRs, Tivo Series 2. And in the other corner, Time Warner Cable’s generic DVR with 120Gigs.

As you can see, the remotes look pretty different. Most of the regular functions are the same.

Let’s start with the power button. On the Tivo, it always turns on/off the TV. On the Cable DVR remote, it will turn off the DVR, or your DVD player, or your TV, depending on what device was selected. So to watch a program, you have to push the “TV” button, push the power button to turn on the TV, then push the “CBL” cable button just to get started. What a pain in the ass. This round goes to Tivo.

Next, let’s take a closer look at the remote. What I love about the Tivo is the shape and position of the play, pause, foward and rewind buttons arranged in a circle, and are relatively large and easy to find without even looking at the control.

Alternately, on the Cable remote, even the play button is hard to find and you have to look down at the remote to find the buttons.  Also, there is no jump skip button like on the Tivo. Tivo takes this round.

On the Tivo, you can jump in increments of 15 minutes. Also, there’s a secret hack that lets you skip 30 seconds at a time. I love this feature for skipping commercials. No such feature on the generic DVR. So to get to near the end of a show, you have to fast foward all the way, which basically takes about 1 minute per hour of recorded programming. Tivo takes this round hands down.

Speaking of fast foward, on the Tivo, if you fast foward all the way, it will automatically pause, then you can press reverse to go back, or press the left arrow to go to the menu to delete or keep the program. On the Cable DVR, you are simply given the choice of delete or keep. If you wanted to see the very end of the show, you can’t do it. If you press “keep,” it takes you to the menu where all you can do is start play again and start from the start of the show. Tivo wins this round by far.

One of the biggest features of the Cable DVR is it has 2 tuners. I’ve heard rumors that the Tivo actually has 2 tuners in it but there’s no way to access it. In any case, the Cable DVR allows you to record one program while watching another. You can trick your Tivo to almost do that by using the tuner in your DVD player but you won’t be able to see all the digital channels.

Something cool you can do with the Cable DVR is to watch 2 shows simultaneously, and pause one, push “Swap”, watch another show, then pause that show, then go back to the first show and play from where you left off.  No way you can trick a Tivo to do that. Cable wins this round hands down.

Tivo has some nice search features, as well as keyword searches. You can only do simple searches on Cable. Tivo has very consistant user interfacing, like always going back to the previous menu by pushing the “left” button. Cable has a “last” button but it doesn’t always work and sometimes, there is simply no way to go back to the previous menu. Very inconsistant and confusing. Tivo wins this round.

Tivo has a slick user interface. It looks like a graphic artist designed it. The Cable DVR has a 70’s interface that looks like the interface embedded inside your TV set. Ugly. But they do allow you to change the color of this ugly interface. I’ll call this round a tie.

Tivo seems to have a lot of areas where “Please wait” messages come popping up because it’s so slow. When you change the order of your season pass, the wait is measured in time so long, you have to leave and come back later. Even just getting the list of channels can cause the dreaded “wait” message. So far, the Cable DVR is much more snappy and rarely has a pause and I haven’t seen a “wait’ message yet. Cable wins this round.

Tivo has some kind of tricky (probably patented) way of fast fowarding where when you push play, it rewinds back a little.  At first, I didn’t like it but I got used to it and eventually, learned to love it. The Cable DVR is more like a VCR and when you push play, it starts from just about that point. Sometimes, you overshoot and you have to push the “replay” button which goes back 15 seconds. I like the Tivo method.

Also, anytime you pause on the Cable DVR, there seems to be some type of small delay when you push play. It’s a little annoying to me. The image is coming from a hard drive. Can’t they buffer it or something? What’s with the stutter guys? This round goes to Tivo for sure.

As for sound, Tivo has cute sounds that it makes when you push buttons. It can get annoying but you can turn it off. I never realized how much I used this to let me know what was going on until I tried the Cable DVR, which has no indications at all. I can’t tell when it’s accepted my command.  In fact, when you delete shows, sometimes it takes a while and since it doesn’t make any sounds, you have no idea if it’s working or not.  But as far as the actual audio, I may be wrong but I think the Cable DVR sound is louder. Don’t ask me why that would be. I’m going to still give Tivo this round anyway.

When you go into a function or setup, Tivo shows that screen only and you can only hear the audio from the show. With the Cable DVR, you get a picture-in-picture of the show in the upper right corner so you can continue to watch the show while you do setups, and changes. Cable DVR wins this round.

As for the box, they are both basically the same, except the Cable DVR can record HD programs and has an HDMI output. If you have HD, this is a big difference, but otherwise, who cares. I’ll give this round to Cable DVR.

So with the score at 8 to 7, the fight goes to… drum role please…

Tivo! But at 8 to 7, it’s really close. And if you have an HDTV, it’s a no brainer for the Cable DVR because the HDTV version of Tivo is expensive.