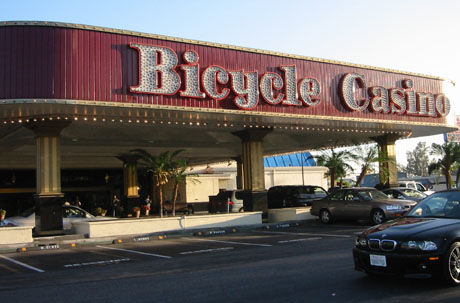 Live at the Bicycle Casino

After the Hawaiian Gardens tournament, I decided to stop by the Bicycle Casino on my way home for some live action to get my money back.

On one big hand, I flopped a small flush against A <heart> Q <diamond> , who was the initial raiser. The flop was all <heart> , and the top card was a Q. I checked and the initial raiser bet out strong. I went all-in for about $400. But since he had top pair and nut flush draw, he called.  Unfortunately, the <heart> came on the river and I got felted.

But I re-bought in and got pocket rockets, got one caller who flopped top pair and called my all-in after the flop.  He came to the table with a lot of white chips ($100) and was an action player at our table.

He called time and thought about it for a long time. He had over $1,000 so he had me covered. I figured he didn’t have a set or he would have called, even being a tight player. Now, I was starting to think he had a monster draw, like 9 <club> 10 <club> , giving him an open ended straight flush draw. After what seemed like forever, he finally blurted out “I call.”

The turn was a <club> completing a flush draw. My heart sank figuring I was now beat. Then on the river, I got the 8 <heart> giving me my full house! I opened my hand to show my full house and the other player mucked his hand.

The action player on my left asked the dealer to open the cards. Personally, I never do that because I think it’s poor etiquette to do that to the losing player. The dealer opened his hand and it was 9 <heart> 10 <heart> which meant that he was only open ended and had 8 outs. That’s a crazy all-in call from what I thought was a tight player. I guess he got bored waiting for hands.

Not much after that, I decided to semi-hit and run and left. 🙂

Previous: Google Apps with Webmail
Next: Tivo vs. Cable DVR