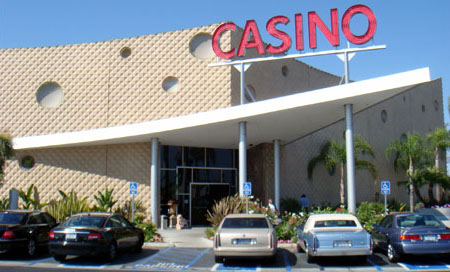 During one hand, the contactor to my right was getting a lap dance from 2 girls, while another girl had her boobs in my face.  Between the naked girls and the players not knowing how to play, we were playing about a hand every 10-15 minutes.  When a dancer went on the stage, they would dim the lights, making it very hard to see the cards.

In my wildest imagination, I never thought I would say this in my life, but the naked strippers were a distraction and it made it very hard to play cards.  Maybe that’s why they don’t have them in the casinos. <wink>

Because the players are novices, it’s very hard to bluff them.  They will call you down with Ace high thinking it’s good, which it is if you’re bluffing them.  So I had to actually wait for a real hand.  I finally get pocket rockets (Aces) and raise the minimum.  The small blind calls me with A-10 diamonds, and the flop is 4, 5, Jack. I bet out and get called.  The turn is an 8.  I bet again and the guy goes all-in which is just another 400 for me to call.  We turn up our cards and I realize he’s drawing dead and can only chop with a 3, so he’s got 4 outs to tie.  I’m sure you can guess what the river was.  Yes, a 3 comes on the river and I have to chop the pot.  Ugh.  At least I didn’t lose, I guess.

Later, a guy goes all in with A-6 off, and the contractor on my right calls him (pre-flop) with pocket rockets.  Once again, the board gives 2, 3, 4, 5, and gives both of them a straight, except the A-6 guy gets his 6 high straight and cracks the Aces.  Ouch.  Glad that didn’t happen to me.

My friend had to wake up at 7am so we say good-bye to the lovely strippers and drive back to LA.  Normally, I would have stayed at the party for some lap dances but I drop off my friend and decide to get some real cash game action at the Hustler.

After having to play against novice players, it was a nice change to play normal at the Hustler. My first hand was 7 <club> 3 <club> and decided to raise with it.  I get 2 callers and the flop is King high. I bet and one guy check calls me.  The turn is another King, and I bet and the guy thinks for a while and folds.  Nice.  That’s the way things are supposed to be.

On another hand, I have pocket deuces and flop a set.  The flop also has a King and the guy with the King bets out.  I make a minimum raise and he calls me.  On the turn, nothing comes and I bet and he goes all-in.  I call and take down a nice pot with my set of deuces.  Deuces never looses.

Now, I do my little Hollywooding and tell the guy, “I’m not trying to mess with you but I have to go all-in.”  That’s the cleaned up version of what I said.  Suddenly, it gets real quiet at the table as the guy goes into the tank.  While he’s thinking, I decide to mess with him a little more by telling him to just fold and I’ll show him my cards.  He goes all-in to call me and I show him the bad news.  Nothing comes up on the turn or river and I take down a huge pot with my deuce – 3.  Nice.  This must be my deuces night.

So after my debacle at the private party, I have a great session at the Hustler.   But driving home, I had to think about the boobs in the face at the party.