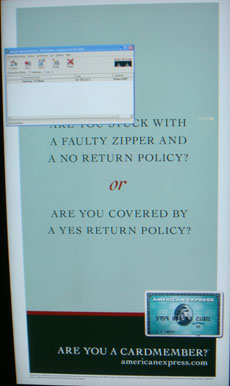 Since we are officially in the Christmas shopping season, I though I’d share my shopping pictures with everyone.

During my trip to the Westside Pavilion, I noticed that one of the plasma driven advertisement had a pop-up window on it so I took this picture.

It looks like the computer is on Windows XP and it got disconnected from the Internet or something.  Something else that I noticed was that although there was another plasma on the other side, they must have been connected to different computers because the same error didn’t show up on the other screen.

To me, this seems like overkill.  Why can’t one computer drive 2 screens.  I don’t understand why they need 2 computers to drive 2 screens that are back to back.  Maybe they have too much money and not enough engineers.

I assume new ads are being downloaded via the Internet to these ad displays, so if this one is disconnected, I guess it’s showing the same banner.  Hopefully, they have some type of watchdog process that will send a message to them telling them of the error… oh, they’re disconnected.  Well, maybe a watchdog process on the server side.

Here’s a bigger picture of the error pop-up screen in case you’re a hacker and want to see the IP address.

It’s not as cool as those monster sized billboards with the “blue screen of death,” but it’s still fun to see that Windows is being used even for a simple application like this.  I just don’t understand why imbedded applications like this don’t use Linux.

At least we’re one step closer to living in the world of the “Blade Runner.”  More ads like this with video all over the city and we’re there.