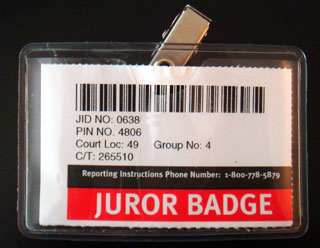 My friend noticed that I didn’t post anything for the entire month of October.  Well, it was a combination of things, but mostly it was jury duty.  Since I’m used to waking up late, having to do jury duty put me on a weird schedule that made me tired all the time.  I just didn’t feel like writing anything.

Over the years, I’ve been on a jury 5 times, so this wasn’t anything new for me.  The case I was on was a commercial burglary, so it was fairly straight forward. Or so I thought.

When we took our first poll, it was 7 to 5, so I knew we were in for some work.  After having the testimony re-read to us by the court reporter, and spending a couple of hours re-drawing the map of the area on the white board, the count was 9 to 3.  In fact, at one point, the number went back to 8 to 4.

After 4 days of deliberation, the 12 of us finally came to a verdict on the case, at least on one of the 2 counts.  I guess one man’s simple case is another man’s enigma.

What does all this have to do with anything?  Actually, this was the first time that I was picked for a panel on jury duty since I started playing poker.  I didn’t realize it but playing poker and looking for tells, and watching the players have made me a better juror.  In the past, I struggled to see who was lying, and who I should trust.  This time around, it seemed a lot easier to me because of my poker training.

This made me think that maybe the lawyers should play some poker.  As a matter of fact, Mark Seif, a professional poker player, is (or was) a lawyer.  It might even be a good idea to ask potential jurors if they play poker.

Another talent that seems to work well with poker is being a magician.  I used to do some magic tricks starting from about Junior High to about 9th grade when I lost interest when I found computers.  Of course, Antonio Esfandiari was a magician, and that’s his poker nickname as well.

Therefore, a lawyer that’s also a magician probably would be one of the best poker players possible.

Previous: Flexcar in the Wild
Next: High Tech Ad With Extras